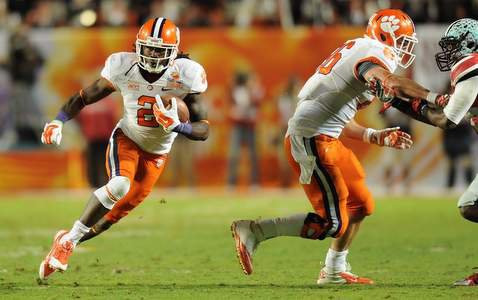 MIAMI GARDENS, FL – Sammy Watkins limped off the stage following Clemson’s postgame press conference with the media, and then declined 1-on-1 interviews because he was sore and had to get treatment before getting on the Tigers’ team bus.

It was that kind of night for Clemson’s playmaker, who saved his best performance in a Tiger uniform in what is probably his last game at Clemson in the Tigers’ emotional 40-35 victory over Ohio St. The native of nearby Fort Myers finished with 16 catches for 227 yards and two touchdowns.

Watkins sat on the stage following the game, and told the media that his decision on whether to turn pro or whether to return for his final season at Clemson has already been made.

“I’ve made my decision, but I definitely want to have respect for the university and coaches,” Watkins said. “We talked about the situation and what was going to happen after this game. We’ll take that up on Tuesday.”

Watkins carried the ball on Clemson’s first play from scrimmage, and he was unstoppable as he set Orange Bowl and personal records. Watkins entered the game as the owner of the Clemson record for all-time receiving yards, and Friday night he set the school marks for receptions [240] and tied DeAndre Hopkins' touchdown catch record of 27 during the win.

However, Watkins was humble when talking about his accomplishments.

“It’s not all about me, and it’s definitely the offense that coach [Chad] Morris is running,” Watkins said. “It’s an honor to break all those records, but it’s great to do it with the team and have all the success with the team.”

Clemson head coach Dabo Swinney made it clear in his postgame comments that the Clemson gameplan was going to run through Watkins and quarterback Tajh Boyd.

“The biggest thing going into this game, we were going to win or lose the game going through No. 10 or No. 2,” said Dabo Swinney. “That was the plan.”

That plan would have worked better only if Clemson hadn’t committed silly turnovers and penalties, but the Tigers still found a way to gut out the victory behind the Superman effort of Watkins.

“Tonight was a special night for Clemson and our offense,” Watkins said. “We definitely excelled against Ohio State. Tajh played great and the offensive line played great.”

Swinney was asked if he would have a conversation with Watkins about his plans once the team returned to Clemson, and Swinney laughed at the notion that Watkins needed any of his input and made it clear that he thinks Watkins has accomplished all he needs to accomplish in a Clemson uniform.

He then said that if Watkins did decide to return, he would no longer be allowed to throw the football – Watkins’ pass to Tajh Boyd on a 2-point conversion attempt late in the game was knocked away.

“Did you see that pass? Tajh was wide open,” Swinney said. “And then Sammy just lobs it up there – and he has a rocket for an arm – and Tajh almost had to call for a fair catch. No, he won’t be throwing the ball anytime soon.”

Watkins likely won’t be called on to throw the football if that is his next stop, and his effort Friday night showed that he was more than ready for the challenge, as Ohio St. head coach Urban Meyer can attest.

"Whenever you have a guy that has that much vertical speed, it creates a cushion (in defensive coverage)," Meyer said after the game. "Then you just flipping those bubbles to him, that's tough to defend. Obviously we didn't do a good job, but I don't know all the receivers in the country, but I can't imagine any better than that guy."

“That guy” saved his best for last.