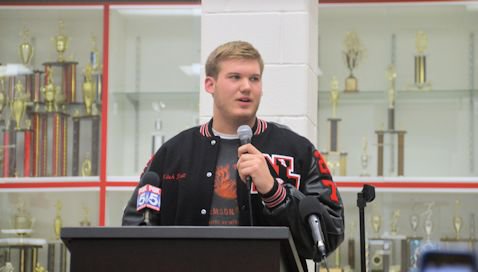 Mitch Hyatt is regarded by many as the nation's best high school lineman.

Clemson is making a splash in the national recruiting rankings, moving up to No. 5 in ESPN’s rankings last week and up to No. 4 by Rivals after picking up 4-star tight end Garrett Williams

That’s good news in more ways than one. Yes, following recruiting and the ascension up the rankings is fun to watch, and it’s always a nice exercise to envision what the depth chart will look like in a few years.

However, this stellar recruiting class is important because of who the Tigers are chasing – Florida St. Yes, Clemson fans want the streak against South Carolina to end, and the conversation about any season begins and ends with the rival Gamecocks. A win over the Gamecocks would help from a national perspective, and the game means a lot coming at the end of the season when the pollsters look at ‘what have you done for me lately.’

However, the Seminoles won 49-37 in Tallahassee two years when the Tigers self-destructed on special teams and defense, and FSU demolished the Tigers’ ACC and any national championship hopes with a 51-14 pounding in Clemson last season. That one just wasn’t even close, and the ‘Noles won that one across the board – the lines of scrimmage, on defense, on offense and special teams.

Under head coach Jimbo Fisher, the Seminoles have won three of the last four in the series, and will more than likely be prohibitive favorites when they host the Tigers in Tallahassee in September.

The new college football playoff system will take over this season. Unlike the BCS, the new format will not use computer rankings or polls to select the participants. Instead, a committee of 13 experts will select and seed the teams. Want to make the playoff? Then you had better win the ACC, and that means knocking off Florida St.

Florida St. won the national championship last season, will be favored by many to repeat this season and that program looks poised to make a prolonged run of excellence. Why? They’ve done really, really well on the recruiting trail in recent seasons.

According to ESPN, Florida St. finished third nationally in 2014 while Clemson finished 12th. In 2013,the teams were closer when the Noles finished ninth and the Tigers 13th. In 2012, Florida St. finished second behind Alabama with a class that included defensive end Mario Edwards and quarterback Jamies Winston. The Tigers finished 10th with a class that included Travis Blanks and Jay Guillermo, but also included two players no longer on the roster in Patrick DeStefano (injury ) and Chad Kelly (dismissed).

The Seminoles set the table for last season’s championship run with the top-ranked 2011 class when they signed defensive tackle Tim Jernigan, safety Lamarcus Joyner and running back James Wilder. The 2011-12 classes – ranked first and second – were the backbone of the championship run. Clemson finished eighth that year in the recruiting rankings.

Do recruiting rankings always translate into success? No. But the Tigers finished second in 2008 – the year Da’Quan Bowers was the nation’s top recruit – and rode that class to the ACC Championship in 2011.

There is also this to take into account – nine Clemson players have been selected in the last two NFL drafts. Florida St. has had an astounding 18 picked in that same timeframe, and early mock drafts show that trend won’t change next season when Winston will headline an astounding group of talent.

Wanna beat the ‘Noles? Wanna be in the four team playoff? Yes, wins over South Carolina will help both of those causes and will help with state pride. But don’t kid yourself, it starts with recruiting and it starts with beating Florida St. on the recruiting trail.