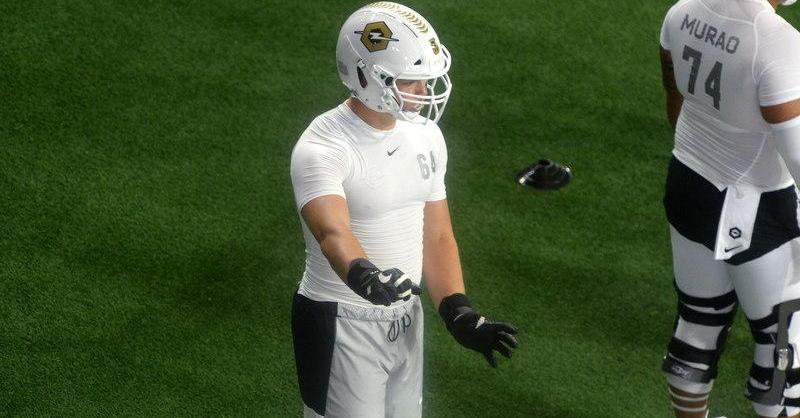 Parks gestures to a teammate Monday at The Opening

FRISCO, TX – Clemson offensive line commit Walker Parks’ summer to remember continued at The Opening Finals Monday when he turned in several impressive sets during the 1-on-1s against some of the nation’s best defensive linemen.

The Opening Finals are being held this week at The Star, Dallas Cowboys World Headquarters, and Parks is doing a diary for TigerNet. Here are some of his impressions from his first day of action.

What was the highlight of the first day?

Parks: “Honestly, today, the most fun part for me was getting to hang out with kids (from a local cancer hospital) on the field. I got to meet the kid Ryan who opened up his toy jar and everything. He actually just finished treatment and beat cancer. They said he had been playing flag football and he's going to play his first season of tackle football this year, and that got me pretty pumped up hearing about him. Just being out there with them on the field and making them feel like they are superstars. Those kids really are. I don't know how they do it because that a whole other level of strength that I could probably never tap into. Seeing them out there running around and enjoying themselves, that's probably the coolest thing of the whole trip for me.”

What was it like getting out there with Paul Tchio and Mitchell Mayes to maybe get a glimpse into the future?

Parks: “That was really fun today. Paul took all of the reps at guard and he was pretty dominant. Mitchell was pretty dominant and so was I along with the d-line, so all of the Clemson guys out there showed up ready today. I think we had a really good showing. Experiencing that now is really good because in a few years down the road we'll be able to look back and think that we played together then and now. It's the same thing with Bryn Tucker. I got to play with him before either of us were committed or had offers from Clemson. We did one of the Rivals camps and went side by side. Just being next to these guys, it's what it's going to be like in college and I can't wait for that.”

What reaction do you get when you tell other recruits you're committed to Clemson?

Parks: “It's pretty much been the same thing the entire time. Everyone is kind of like, 'Holy crap, how many Clemson guys are here? Out of everyone I've talked to, half the guys are going to Clemson.'”

What's it like having your dad - who played for Kentucky - be able to give you pointers on the offensive line and be able to be here to support you?

Parks: “It's amazing. He's the man who really taught me how to play football. From the time I was five years old, he was my coach. He developed me. There were a couple of years where he wasn't my main offensive line coach - and he isn't now - but still having him as a reference to talk to and have at camps. To have a father there supporting me is one thing, but to have him know about the game of football, especially my position, that's a whole other story. He's been nothing but the biggest blessing to me when he takes me around to all of these camps. I think one summer we went to 17 camps. He was helping me to chase my dream and I can't thank him enough for that. I'm very grateful for that man.”

What was it like to be in The Star and kind of see what the NFL is like?

Parks: “That was awesome this morning. I saw a couple of guys running out on the field. I think they're doing conditioning. We listened to a speech this morning in the meeting room and after we were let out I was looking for the bathroom and I think missed - someone told me it was to the left and I went right - and I went down the hallway and asked a staffer where the bathroom was. He took me in the weight room so I got to see them lift and what the weight room is like. I thought it was really cool being in there because nobody else got to do that, so I stopped to watch them for a minute. I hope I'm playing here again one day.”