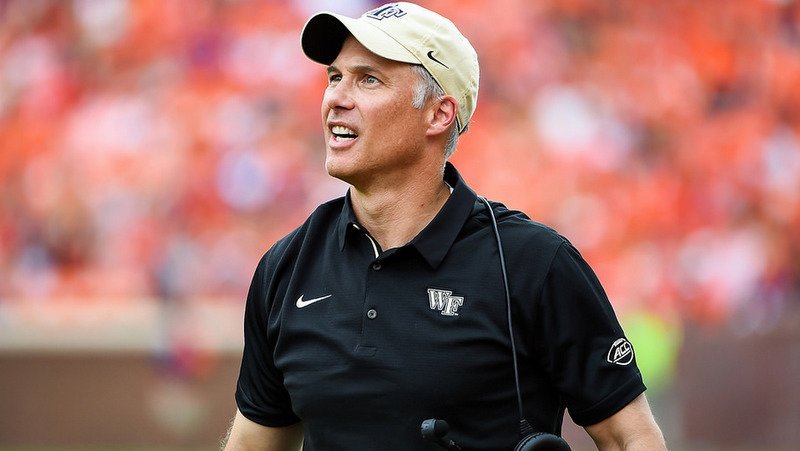 Clawson says the Tigers have good players across the board

Clawson’s Demon Deacons (3-2 overall, 0-1 in ACC) host the Tigers (5-0, 2-0) Saturday at 3:30 pm in Winston-Salem, and he says while people talk about Clemson’s defensive line, he watches the film and sees a complete football team.

“I know people talk a lot about their "D" line and how good they are and all that is true,” Clawson said. “But just what a complete football team they are, at linebacker, in the secondary, on offense. Their "O" line is really good, their backs are elite. They have more depth at receiver than any team we've played in my time here.

“And they have two quarterbacks and both of those kids can throw it. So this is one of the elite programs in college football right now. And it's a great opportunity for our team. But it will be a big challenge for us.”

Clawson then said playing a team like Clemson is exciting for his program.

“I mean, this is a week that you know the players are excited. There's a little bit more hop in their step. And if they're competitors, they love these games,” he said. “And we never try to downplay it. We don't try to overplay it. But the players know. And they know what the opportunity is and they also know what the challenges are.

“At the end of the day those programs are what they are and their records are their records because they've got really, really good players. And our players are smart. They watch the film. I mean we can tell them ignore the color of the uniforms and the emblem on the helmet, but when you're watching Christian Wilkins and Dexter Lawrence and you're watching Renfrow and their backs and all their receivers, and Mitch Hyatt, I mean our kids know when they're playing good players.”

Quarterback Trevor Lawrence should be able to go for the Tigers, and Clawson said Clemson’s offense is more dangerous through the air with Lawrence at the helm.

“Their offense is their offense. I think Kelly (Bryant) -- they appeared a little bit more willing or wanting to run him if they need a critical play,” Clawson said. “Trevor to me is just a very gifted thrower, passer. He's accurate. He has great velocity on the ball. He's got a quick release. And Clemson can play the game either way. They're good up front and when they had to win that game last week they ran it.

In other words, Clawson sees a Clemson team that is hard to defend.

“They're not a football team that you can say, well, if you just take this away you're in good shape,” he said. “They have the ability to run it, throw it, spread the field, hit every zone in the run game and hit every zone in the passing game. So they're very efficient, well-coached and their scheme is very well-thought out. They know what they're doing.”