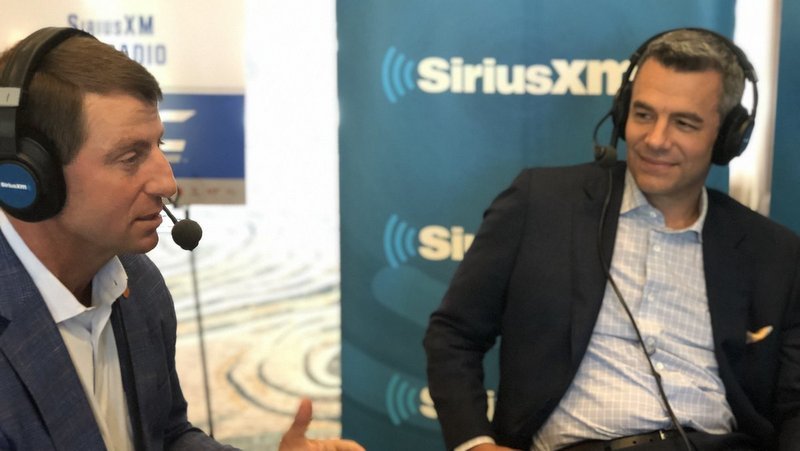 Dabo Swinney has endured failure, and he has enjoyed success, so when March Madness rolled around this year, he felt like he knew what Virginia basketball head coach Tony Bennett was going through. Sitting over a cheeseburger with his wife Kathleen one Sunday, Swinney reached out to ACC Commissioner John Swofford for Bennett’s number.

The rest is history.

Bennett, in his 10th year leading the Cavaliers, has turned the program into a champion. However, it hasn’t always been easy. Many have wondered if Bennett’s slow style of play and defensive mindset would produce a team that could weather the rigors of the NCAA Tournament. Only a year ago, the Cavaliers suffered the most embarrassing loss in program history when they became the first No. 1 seed to ever lose to a No. 16 seed in the NCAA Tournament.

Swinney’s 2018 Tigers went undefeated and became the first team in the modern era of college football to win 15 games in a season. But his tenure at Clemson hasn’t always been easy – he had a 19-15 record through the first 34 games of his career, and many Clemson fans were ready to move on. The Tigers made it to a BCS Bowl for the first time in program history in 2011 but suffered an embarrassing loss to West Virginia in the Orange Bowl.

Both coaches know what it means to turn failure into success, and the two coaches sat down with Mark Packer at the ACC meetings in Amelia Island Wednesday to discuss their friendship.

“There is no person out there who has been very successful at something which hasn't failed miserably. The difference is they kept going,” Swinney told Mark Packer Wednesday on Packer’s ACC show on SiriusXM. “They learned. They picked themselves up, and they didn't let the criticism destroy them, and they refused to let it define them. That is my favorite thing about what happened this year.”

Swinney said Bennett was on his mind heading into the final few weeks of the basketball season.

“I called Tony a week before the game. I just wanted to tell him. I had been in church that Sunday and it was on my spirit,” Swinney said. “Kath and I had gone to eat a cheeseburger, and I told her, 'I have to call Tony Bennett today.' I knew exactly where he was - he has this week to prepare. I had been thinking about it all night, and I had gone to church, and I was like, you know what, I am going to call him because he needs to know. So (ACC Commissioner John) Swofford gave me his number - I didn't have his cell number.

Swinney said Bennett’s players would carry that lesson for the rest of their lives.

“And that lesson that came from that is way bigger than anything that will come from winning that championship game this year,” Swinney said. “And those guys will carry that forever. I said, 'I know you are going to win it. I know you are. Just enjoy the week and enjoy the preparation and enjoy the moment that you are getting ready to prepare for because it's your time.'”

“That was powerful. It really was. I shared it with our team, and I used a quote that he has with our team that is incredible - let the light that is inside of you shine brighter than the light that is in on you,” Bennett said. “That was so powerful. But his advice - he had been through it. And the fact that he had been through it, it quieted my spirit, too. It made me feel at ease. I was hopeful, and you always feel like this might be a team of destiny, or there is a bigger plan going on. It did feel like that, the way we beat Purdue. And then he calls. And there were a few other things that just aligned.”

Bennett said if his son played football, he would want him to play for Swinney.

“I always look at who would I want my son to play for and I talk about (Boston Celtics head coach) Brad Stevens, and if it were a different sport, I'd want him to play for Dabo,” Bennett said. “I observe, and I learn a lot - I was going to say as a younger coach, but I'm actually two months older than you (Dabo). Who would you want your son to play for? That's the truth serum. I learn so much, and he has such a big platform and how he handles success. You haven't failed too much but you see that too, and it's real. I know people who are around him, and I said early on, 'Is it real?' They say it is, and that brings me the greatest joy.”