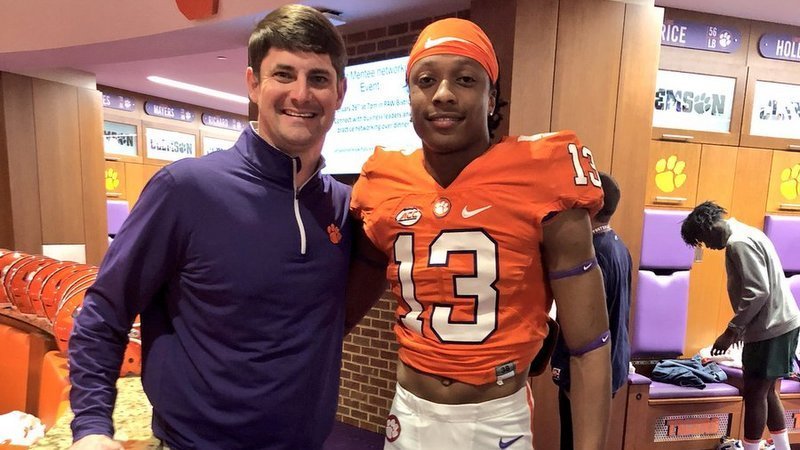 Jennings poses with his family on Clemson visit

Ali Jennings thought he knew everything there was to know about Clemson, courtesy of his brother, Tiger defensive back K’Von Wallace. Jennings then made a visit to the Clemson campus as a recruit, and it changed his perception.

Jennings, a Class of 2019 wide receiver out of Richmond (VA) Highland Springs, was invited by the coaches to visit Clemson earlier this month, and he showed up for the Tigers’ junior day on March 3rd. It was the second visit to campus for Jennings.

“It was a great visit,” Jennings told TigerNet. “Honestly, I didn’t want to leave. Everything was great. Clemson is obviously a place that feels like home because of my brother, but to see it as a recruit was amazing. After I left I was already planning to get back.”

As a junior in 2017, Jennings earned all-region and all-state honors after recording 47 receptions for 709 yards and 13 touchdowns. That led Clemson wide receivers coach Jeff Scott to extend an invitation.

“He told me they like my film, and they wanted to see me in person,” Jennings said. “And Coach (Brandon) Streeter called one of my coaches this week, and he said that they really want me to come down to camp so they can see me in person. I know I have the talent to play at that level, and if they see me in person I will get an offer.

“I don’t know if I will go down for one day of camp, or three. I talked to a guy who was down there for all three days and he said it was just like being in college. You live in a dorm and you have to get yourself up and out to practice. I am still trying to see when I will be down.”

Jennings poses with his family on Clemson visit "

Jennings received his first offer, from the Naval Academy back in December. Over the past two weeks, both Army and Air Force have offered, but he hears from South Carolina, Temple, and other big-time schools who want to see him on the camp circuit. Since February 16 Jennings has visited Virginia Tech, Temple, South Carolina, Clemson and Richmond.

Of all the visits he’s taken this offseason, Jennings notes Death Valley as being the most influential one and he says a Clemson offer would mean the most.

“Clemson is of course my top choice,” he said. “My brother tells me that Clemson is the place to be, and it’s the place I want to be. I love the family atmosphere and the coaches. I just know that if I want an offer, I have to go down there and prove to them I am worthy of an offer. I know I can do that.”