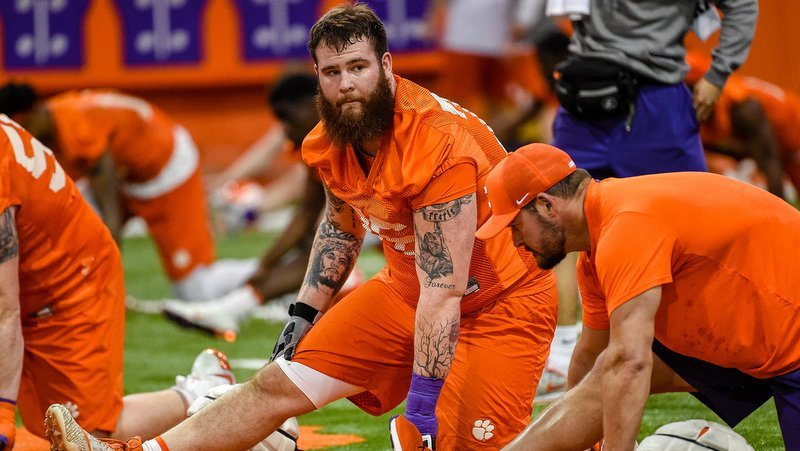 Sean Pollard can play any spot on the offensive line

CLEMSON – Clemson should have one of the best offensive lines in all of college football this season, and line coach Robbie Caldwell says versatility will be a strength.

Caldwell thinks this might be his most versatile group to date.

“Probably so. If you sit down and look at each individual, all of these can play two positions and have done it in practice or a game,” Caldwell said. “We are a little more diverse than we have been. Sometimes guys will come in during the recruiting process and say they only want to play one position. Well, that's fine, but what if you get pigeonholed there? What if you want to go to the next level? Up on that level, they only keep about seven so you better be able to play more than one spot.”

“Jackson has always been very serious about football. Very intelligent and knows what to do. He plays two positions. He has been figuring out his body - you can't compete at this level at the weight he came in here at. He's realized that and found that out. Sometimes they have to see that for themselves.”

“Gage is tremendous. He has a great sense of humor and keeps everything light. He is pretty good at mocking me. He is a very serious football player and the strongest guy on the team, and that is pretty much hands down. He can run. He can do all the things you need. His only shortcoming is his lack of offensive opportunities. I look for him to be the main cog in the wheel this year.”

“I expect a lot of them when they come. Unlike most people, I don't go by the stars they put by their name. That doesn't concern me. One of the guys that has progressed as much as any of them is Jordan McFadden. He is really coming on. He is going to be something special. He red-shirted, so he is a little behind mentally because of a lack of reps because he was on the scout team. But he really had a great spring and he will compete for one of the starting spots at tackle. He is very capable and can step in and play either side right now.”

“Blake is up to 315 pounds now. He is able to maintain the weight and hold it. He can play two positions, both guard and tackle on either side. He is very smart and he's learned the system. It will be interesting to see what he has done over the summer.”

“Sean has played all three spots and he is just so smart. He knows what to do as well as anybody out there, if not better. He wanted that challenge of playing center. That helped give us a little more stability at guard because Gage is 325 pounds. We are versatile there because Gage can move over to center and Sean can move to guard and then we also have Cade Stewart that can play both positions. He has had a good summer.”

*Will Putnam has played mostly guard but will see some time at tackle this August.

*Cervenka is not only the strongest offensive lineman, but he's also the fastest.