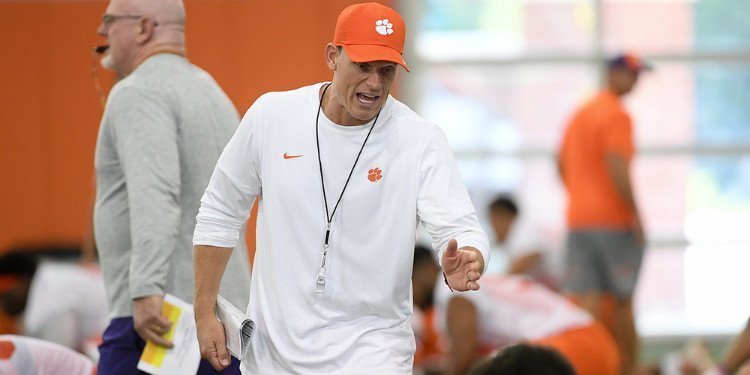 Venables is in the process of raising his young defense

CLEMSON – Brent Venables hopes his young defense will be out of diapers and into pull-ups by the middle of the summer and completely potty-trained by the season opener against Georgia Tech in late August.

Venables’ defense lost seven starters from last year’s team that won the National Championship. Five linebackers that cracked the three-deep have moved on and eight defensive linemen are no longer on campus, including the four members of the Tigers’ NFL-ready defensive line.

Venables isn’t worried, however. He knows he’s recruited well and he knows that many of the players he will be counting on this season played significant snaps last season. It’s all part of the process.

“It’s been good. We had 17 mid-years, nine of them on defense. We lost a lot of great players but that’s what you love about college football,” Venables said. “That’s part of that cycle. You are going to lose guys but you get to recruit guys every year, some years more than others. But if you’ve recruited well and you develop the right way and you play your guys – which I think we averaged the most players played per game in college football – you are going to develop players and your program so that when you do have some of those years when you lose a little bit more there is not quite as much of a drop-off.”

Venables like what he sees from the young defense but admits there were growing pains. That’s when he decided to break out the diaper changing analogy.

“From a parent perspective, you remember those days of when you were changing diapers. As soon as you get a clean one on them they go all over themselves again,” he said. “So that is how our spring went. We had a few hours that would be really good and then a few hours that aren’t so good. Hopefully, we can get them into pull-ups before we get to fall camp and then out there potty-trained by the time the season rolls around. It’s been a lot of fun, just trying to meet guys where they are at and not get them to come to where we were in that last game.

“It’s a group of guys that came here to be challenged and that know how to go to work and that have bought into what we’ve asked of them. They are learning how to practice the right way, how to be a great teammate and how to put the time in the film room. They have just been wonderful that way.”

The goal now is to get them ready for Georgia Tech on August 29th.

“We’ve got a long ways to go before we are a good defense, let alone close to what we were when we played in our last game,” Venables said. “But that’s a group of guys that are very committed to becoming a good defense.”