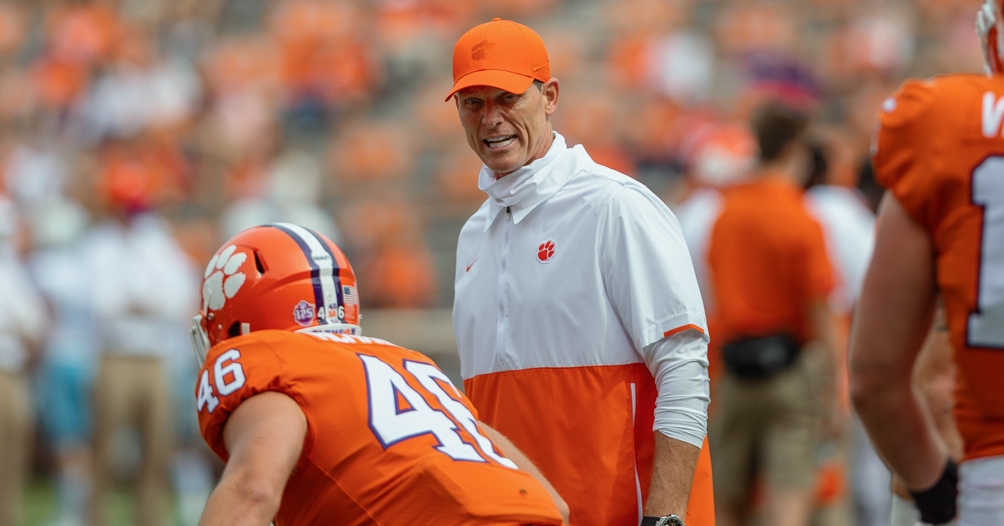 Venables says Virginia will present a challenge (Photo per ACC).

Venables was a little bit of both after last Saturday’s win over The Citadel, a 49-0 thrashing that stands as the Tigers’ first shutout since 2016. The Clemson defense has played well over the first two games of the season, but Venables knows there is still work to do and will use the open date to get better.

"Of course we'll get good on good work, and just trying to improve daily through our bye week, getting our team healthy" Venables said. "A few guys banged up that we're hoping to get back. And just maturing, you know how we handle the bye week is an opportunity to show me some maturity, some toughness to get after it, and to get better. So, you know, really pleased. Again, just with the commitment and the mindset that shows maturity, how we approach today regardless of the opponent. A lot to look forward to, it's exciting. We've got a tough schedule here, moving forward."

Next up for the Tigers is a Virginia team that has yet to play a game this season.

"Obviously Virginia's an experienced team coming back, they've got the same staff," Venables said Saturday. "I'm sure they tweaked some things, added some new wrinkles, and things like that. I know they feel really good about their personnel, get most of their offensive line back and a big time transfer tight end -- it was from Central Michigan I believe (Tony Poljan)."

Redshirt sophomore Brennan Armstrong is set to make his first career start at quarterback for the Cavaliers this weekend versus Duke. The left-handed dual-threat quarterback has appeared in 11 games over the past two seasons backing up Bryce Perkins and is 17-of-25 through the air for 258 yards. He also has 16 rushes for 93 yards.

"They feel really good about their quarterback, athletic, tough, great leader," Venables said. "Some really good other transfers at skill position, at running back, and they played in the Orange Bowl. It's a confident team with a good culture, an established program.

"They've done a great job, you know, we've got a lot of respect for Virginia's staff and what they've done in developing the program the right way through player development, recruiting, and developing a culture. And so they got an excellent spread offense, you know that tempos you, and lots of motions and things like that."

Starting with the Virginia game, it’s all ACC competition the rest of the way.

"I believe after our bye week we've got six-straight ACC games, against some really good, explosive, athletic players and teams," Venables said. "So it's going to be a big challenge but we're working on it. We've got to get better. Just developing our techniques and just looking back at the weight gains. There's so many things that we've got to get better at so really, going to be a great week of of fundamental development."