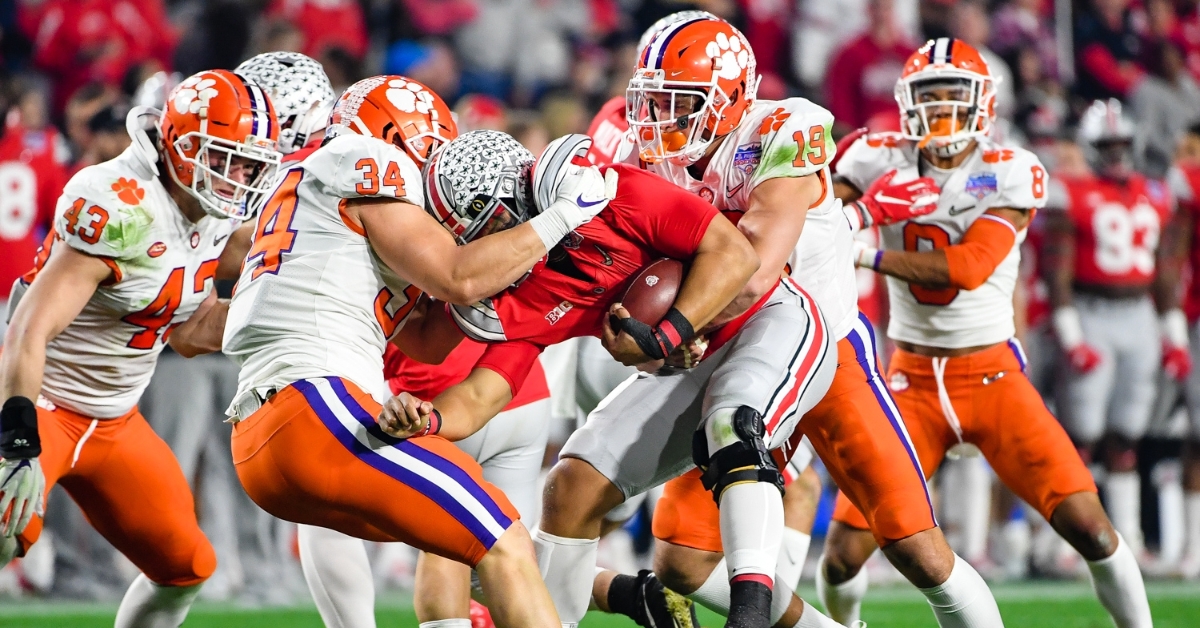 GLENDALE, AZ – Following Clemson’s thrilling victory over Ohio St. in the Fiesta Bowl, the media lined up inside the Tiger locker room waiting to talk to defensive coordinator Brent Venables. The media would have to wait.

Venables took his time with his players, laughing, celebrating, and dancing. Yes, dancing. Venables was in the middle of it all, the biggest smile you’ve ever seen, having the time of his life.

Clemson gave up 16 early points to Ohio St. and two long runs to Buckeye running back J.K. Dobbins, but settled in to hold the Buckeyes to just seven points the rest of the way. Clemson held Ohio St. to 23 points after the Buckeyes led the nation in scoring this season at 49 points per game.

Ohio St. gained just 61 yards on 32 carries (1.9 average) after the first quarter and picked off quarterback Justin Fields twice (Fields threw just one interception heading into the game. The defense also held Ohio St. to no touchdowns in three trips inside the red zone.

“We wanted to keep them out of the endzone and keep them from scoring touchdowns,” Venables said. “Going into the half, I don't think we could have played any worse in the first half, but those red zone responses were huge and at the end of the day were the difference in the game. We started to play a little bit better and get into a good grove in the second half. From the second half on, they just scored once on 4th-and-1. We really responded.”

It was all about adjustments.

“You’re playing a champion team, Ohio State, the best team we have played all year, number one scoring offense in the country,” Venables said. “Try to have a perspective, I got plenty I didn’t like, part of that is me, and part of that is their guys. They just played a little better. On this stage, they’re going to make some plays and we had to make some adjustments.”

Venables said his players had the heart of a champion.

“Holding them to two touchdowns and they’re averaging fifty (points) a game. We got the heart of a champion, that’s what they showed out there tonight. That’s how you overcome countless mistakes,” said Venables.

“At the end of the day, you have to have something that’s different or else everybody will be doing it. Our guys have a pretty uncommon belief, that they’re going to find a way.”

The game wasn’t over until Nolan Turner intercepted Fields’ pass in the end zone with just 37 seconds remaining. Turner was beaten earlier for a touchdown on a similar play.

“That is who he is, man,” Venables said. “He is a champ. He has been that way all year and has really made very few mistakes. No surprise, though, in how he responded. That is who he is. He is a heady dude and he is a ballplayer. He has probably graded out as well as anybody if not better than most all year when he has gotten his opportunities. To see him make another great play like he did against Virginia in the end zone is no surprise. I am super thankful for him and proud of him.”

Next up? Joe Burrow and the high-flying LSU offense.

“It's sickening. It's sick. I don't even want to talk about that right now,” Venables said of the LSU offense. “We are 14-0 and 29-0 and five straight Playoff appearances. We have done so many great things. We have another great opportunity to go play for it again. Not in my wildest dreams would I have believed. I was pretty skeptical heading into the year. You have to go prove it and you have to go earn it. Our guys have constantly found a way. We have had a lot adversity through the year and this is a group that has responded every single time.”