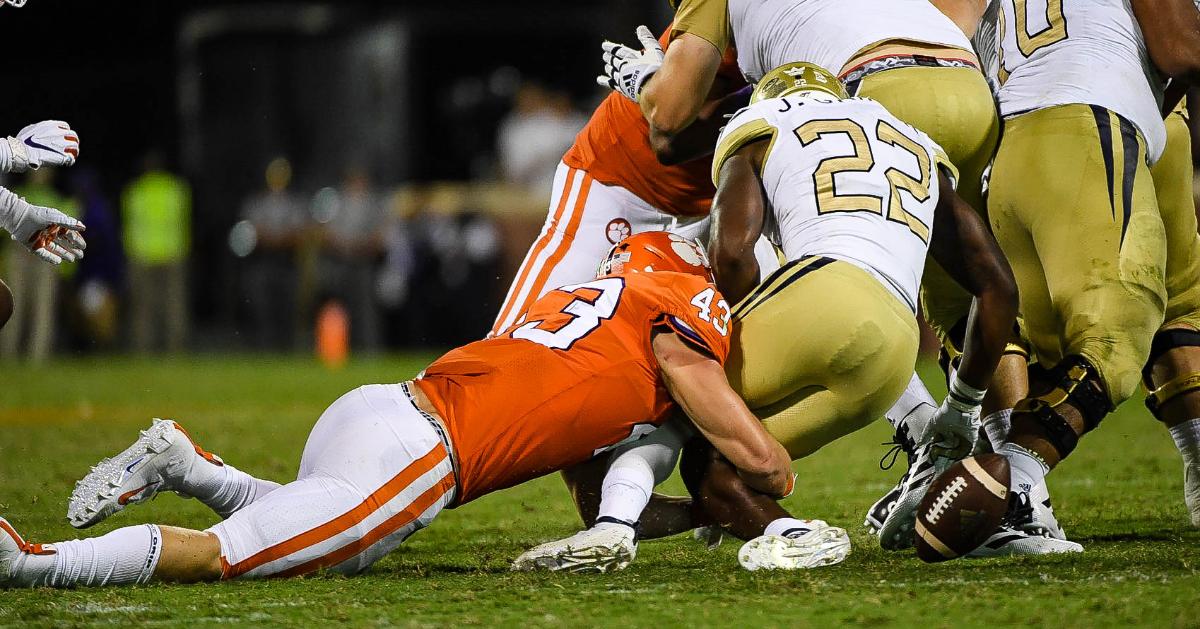 Chad Smith forces a fumble against the Yellow Jackets.

CLEMSON – Brent Venables sat down in the media room following Clemson’s 52-14 victory over Georgia Tech and smiled a relieved smile. The first game with a bunch of kids was over and the Tigers came away victorious.

The Tigers had to replace several veteran leaders from last season’s defense – a defense that led the nation in points per game allowed – and had new starters at cornerback, two linebacker spots, and all four spots on the defensive line.

The defense held the Jackets to just 294 total yards, but many of those yards came after the benches were emptied starting in the third quarter.

“Proud of our guys. I thought they came ready to play. I saw guys play with tremendous effort,” Venables said. “A lot of passion. [I] thought we were physical. Our positioning was pretty good. [It was] the first game for a lot of guys as [starters] and I thought they performed well, particularly in the first half. We had a lot of situational football where our guys really responded, came through. We had a couple of forced turnovers and some fourth-down stops. We saw a lot tonight.”

Venables said his front four will learn from Thursday’s effort.

“No doubt. And we left some money on the table,” Venables said. “With a little bit of improvement and correction, [we] could have had a shutout. It’s that close. [Georgia Tech] has done a nice job. They’re doing the right stuff and using their personnel the right way. But absolutely, there’s a ton that you saw our guys grow up from.”

"He played well. I saw him flying around, he made some huge hits,” Venables said of Simmons. “He's reckless with his body, and his positioning was pretty good all night. He's really coming into his own as a player and has a good understanding of the guys around him. And he'd be the first to tell you that he's got plenty to improve."

Venables will also look for improvement from his other linebackers.

"It was good. They'd be the first to tell you that they left some money on the table tonight,” he said. “Disruptive, downhill, managed the game well, let me coach them, took responsibility when it wasn't good. Good awareness and understanding, and I thought they did well tonight."

Venables was most pleased that he was able to play a lot of players, a critical step in the growth of his young defense.

“It's critical. We're a young group and we're going to need to play a lot of guys. The more they play - football is a developmental game so you've got to play,” Venables said. “Whether it's good or not, you've got to play. You get in a game and that's how you really can strain yourself and that's where guys can see, 'Oh, now I see what you're saying in practice.' But they have to be willing to hear and listen to the truth and be willing to accept it and that's how you improve.

“A lot of times with young guys they don't like to be critiqued and they don't like to take responsibility and they want to push it on someone else. We haven't shown a lack of maturity from that standpoint. I've been really pleased and tonight was no different. I think our guys' attitude was great. I really expect them to continue to make incremental improvements from week to week."