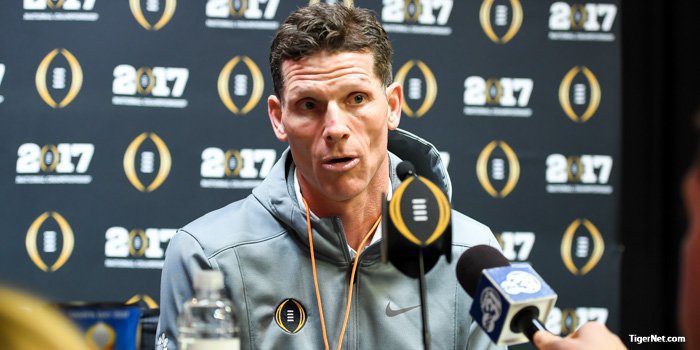 Venables says they use the 2014 defense as the standard

“Yeah, they're very multiple with what they do. They've got speedy receivers on the outside and they use them in a variety of way - the jet sweeps and attacking vertically,” Venables said. “They've got a couple of good running backs. Number eleven was a young player, just a freshman a year ago, excellent player - good speed, toughness and physical. The quarterback can really fly. He's a tough guy and is very physical, excellent quickness and speed and they are very multiple in what they do. A little bit kind of like Pitt in a lot of their formations and motions and things of that nature. We are really going to need to come out and be incredibly disciplined and focused - lining up the right way, eye discipline, gap integrity, setting the edge to the defense. It's a good challenge for us out of the gate, just in regards to as just mental as it is anything.”

Venables said that defensive back Ryan Carter will start out at cornerback, but will move to nickel in throwing situations. 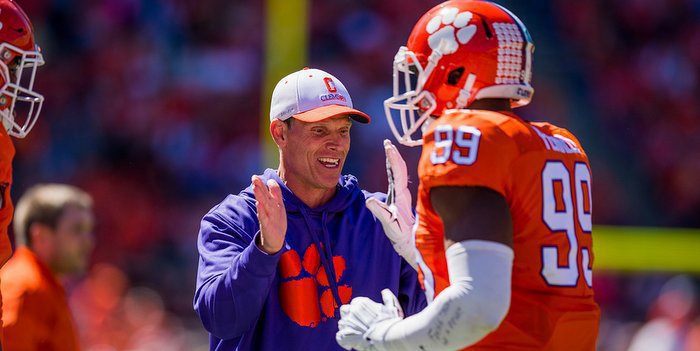 Venables says they use the 2014 defense as the standard "

“We'll go with 10 and then when we feel like they are going to throw it to the slot, we're going to put him at nickel - throw it out wide, we're gonna put him out there,” Venables said of Carter. “We're going to rotate our guys, we feel like we have good depth there and there are certain times where Ryan (Carter) will play nickel, when he's not playing corner, sometimes he might be on the bench when we're rotating. It's been a great competition with those guys and I think when it's all said and done we may not know who the bonafide starters are for four or five weeks from now. That can change from what the depth chart says today.”

The media opportunity was the first for Venables since a shortened interview session after the defense fared poorly in a scrimmage, but he was in a better mood Tuesday.

“Better than that day. It was a good camp and I feel like we got better,” Venables said. “We're developing a lot of young guys to compliment the guys we have returning and I've been please with their progress that we've made since then. I'm looking forward to developing our identity on defense and that will take place throughout the course of the year. I'm just anxious to get a chance to play someone else and see what our guys can do. Go watch their hard work be rewarded.”

He then said that defense can learn from failure.

“I think through both success and failure. Now, it's just how to quantify it, particularly with the players. If we have a bad scrimmage, they're like ‘It's not a real game’ but the right ones are invested in the right way,” he said. “There is a lot of truth to that. When there are stakes I think you develop that through just experiencing the season - the highs and the lows, everything in between and the grind - things of that nature. Right now, it's all talk, but that's developed in we try to foster that growth and development, but ultimately, it's them that have to go in and compete and respond and put the work in.”

“Well, we play a lot of left and right as well and you like those guys to be the same guy. Some guys are just better cover guys and aren't as physical. Some guys are more physical and think and react and their instincts allow them to play really fast and things happen a little quicker in that boundary. So, you really want a blend of all of it - great coverage skills, tough physical, play zone, play man, tackle well, blitz well - you really want that from both positions.”

On Xavier Kelly and Shaq Smith playing on Saturday

“Yeah, I expect them to play. Shaq wasn’t listed because he missed two weeks of camp. He was doing very well and you got to earn you way back unless you have already solidified yourself as a starter. If Kendall Joseph misses four days of practice and comes back healthy, he has earned his position. If he comes back and is terrible, then we re-evaluate that. Shaq is coming.”

On sensing confidence from the defense

“I definitely sense the confidence. I sensed that confidence from those guys a year ago. Sometimes you hardly have anybody coming back that was a previous starter and you do well. You do a lot better than people think. Sometimes, you get a bunch of starters back and for whatever reason the chemistry isn’t right and the commitment isn’t there, maybe you have some injuries. Every year is just different. Ultimately, it is the people and the leadership and staying healthy. You always have to have some guys coming along. Guys like Kevin Dodd or Tankersley in particular kind of came out of nowhere. They were guys where if it all came together, you would have a really good unit. At the end of the day, you have to compliment each other at all three phases of the game to perform well.”

“They hear about it a lot because we throw it in their face. It is also because that is all of our teach tapes. We got a lot of teach tape where we are looking at them. They were just relentless. That’s what I love. That group, you couldn’t satisfy them. They wanted more reps. They wanted more meeting time. They wanted more weight room time. That group was special, man. They all had a chip on their shoulder. The leadership was just unbelievable. Unbelievable. Just because there was just so many of them. That was a senior laden defense too so you are always hopeful that you are going to get that. They took it to new levels. What is remarkable too is where it was one of those unique years where your offense and defense didn’t really compliment each other throughout the year, but as a team they all kind of got better throughout the year. It was one of those really fulfilling years as a coach where you see the commitment at an all-time high. How you didn’t win every game, but your players stayed engaged through the beginning to end and you got better as a team from the beginning of the year to the end. It was a great journey, but the legacy that those guys had is pretty special. I know our guys respect that unit and those players for all of the things that you would want to be respected for. Just all of the intangibles. We remind them about it a lot. Again, I don’t have my head in the sand. I know what is talked about out there. I am just a firm believer in you got to go do it. You got to go earn it. You don’t just do it or earn it in one game or one play. It’s a whole season’s worth. We always talk about the best players are the ones that are the most consistent. Well that is the same thing with your unit. Guys know how to show up day in and day out and are able to sustain that through the course of a season. That’s what makes it really hard to be a good player, good unit, good defense or good offense, a good team. It is a long, hard season and sustaining success and fighting through the adversity that is going to happen is not easy to do. When you have the character and the toughness, you have the chance to do something pretty special. “