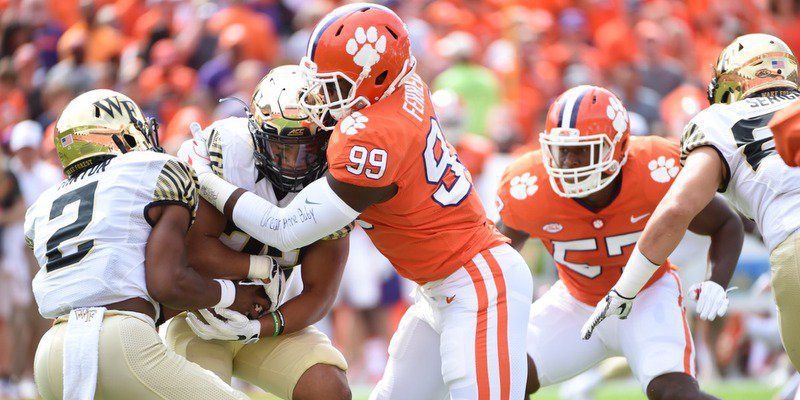 Clelin Ferrell makes the tackle in the first quarter against Wake

Clemson jumped out to a 28-0 lead but Wake Forest scored twice in the fourth quarter against a bevy of reserves from the Clemson defense, but Venables said he was proud of all his players.

"I really don't ever think that way. I'm looking at if we're playing well. Sometimes you play well and they still score on you anyway,” Venables said. “Really I'm just proud of our guys and the young guys got to get in there and play and just three busts on the wheel route and the post route touchdown to #7 and the last play on fourth-and-goal, probably another bust. Those are plays you get kind of disgruntled about but otherwise, I thought our guys responded and came out with the right focus and intensity, set the tempo right away and played outstanding. Came out and really got after them in the third quarter, loved how they played. Had a great mindset and there will be some great teaching opportunity on the last few drives of the game but thought our guys really played well and gave us a chance to win.”

Veterans Christian Wilkins and Dorian O’Daniel told the media they didn’t like the reserves giving up the scores, and Venables smiled.

"I think it's a big deal,” Venables said. “The best teams I've been around are player-driven and they understand the standard and again, you can live with all of it except for the bust. I know there's some bust in there and I'm glad they didn't like it and neither did I."

Venables said his players had the right mindset.

"I look at it one game at a time and I thought they played really well for the most part today. Every game is that way, 'We need to do this better, we need to do that better.' To me you got better because you're 6-0 and you beat a quality opponent,” he said. “A team that we thought would be a tough out and they certainly were. You get up on them 28-0 and you're doing a lot really, really well and i think that starts with their preparation and respect for the game and their intensity. You come out at halftime 14-0, again having the right mindset, 'Let's start over.' Nothing is less important than the score at halftime and our guys had that mindset and again knew that Wake Forest would not just go away and they're very good with being content and trying to make it a ball game all the way to the very end and good for them.

"Real proud of our guys and we've got a short turn around this week and playing a Syracuse team that can throw the ball all over the lot and has had ultra-success on offense and are not anywhere close to the kind of defense they were last year. They are much, much improved and very disciplined in what they're doing and had a chance to beat LSU and N.C. State. Being at their place, expect to get their best shot. Steve Ishmael, I think is the leading receiver in the country and that quarterback, man, is a handful and can really wing it around and has a great compliment of skill players and a good system so they'll get ready to throw the ball 60 times and spread you out and defend every patch of grass. We'll have to get healthy quickly and again have a great week of preparation going on the road."

Clemson faces a short week, traveling to Syracuse to take on the Orange Friday night.

"Well whatever the challenges are other than the traveling is different is that Syracuse has a short week too, and it is at home so when you have a short week you'd love to have that at home,” Venables said. “A year ago we had to go to Georgia Tech on a short week so I think our guys are focused and they understand. We've been talking about this week for a while now and talking about tomorrow. Tomorrow is a Monday and again, I think it really comes down to us being organized and having a plan and then for the players, getting rest and getting into ice tubs and a quick turnaround that way and we'll be mindful of those types of things. Just being all out committed this week. Totally exhaust every moment this week in regards to our preparation for this because it's going to be a great challenge for us going up to their place."