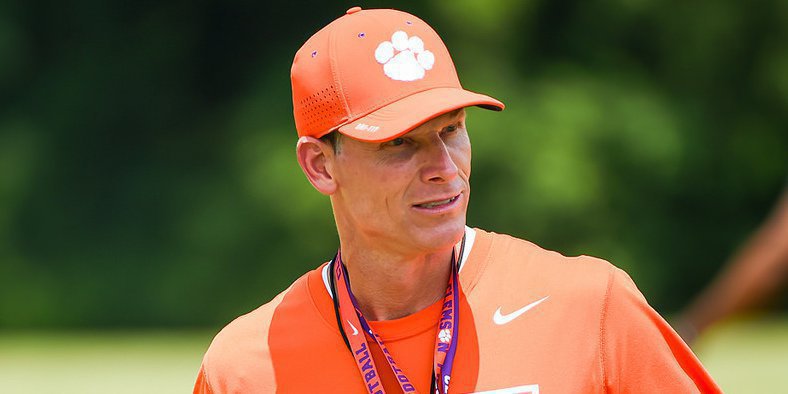 SUNSET – Want to get Clemson defensive coordinator riled up? Mention the Pitt game and the shovel pass, and Venables’ intensity will ratchet up two or three more levels.

Clemson head coach Dabo Swinney can laugh about the Pitt game now – the Tigers used the loss as a springboard to a title run – but Venables isn’t in a laughing mood. Even the passage of time doesn’t ease the sting.

Pitt’s offense rang up 464 yards of total offense in the upset win over the Tigers, but it was the shovel pass to the tight ends that cost the Tigers dearly. Starter Scott Orndoff entered that contest with a season-high five catches, and that was in the opener against Villanova.

Against Clemson, Ordoff caught nine passes for 128 yards and two touchdowns, equaling his season output for scores. Backup tight end Jaymar Parrish entered the game with three catches for 34 yards but reeled off a 44-yard catch against the Clemson defense. Fullback George Aston had scored two touchdowns all season but caught four passes for 29 yards and two more scores.

Not a great day for Clemson’s safeties and linebackers in coverage and Venables didn’t have to see the tape to realize that.

"I knew the problems. I didn't have to watch it on the film. I knew it on the field,” Venables said after the game. “They used the tight ends all kinds of different ways, right? Yeah, a throwback to make a good play for a 55-yard touchdown. The shovel is the play where it's not the tight ends; it's the option, and they happen to use him as the guy. They had 13 shovels for 75 yards and the tight ends caught all of them but one or were the targets for all of them but one."

It was something that Venables quickly corrected, and he told the media last week that the play didn’t work after Pitt had so much success.

“That would be an interesting statistic, post-Pitt game,” Venables said. “One of the most miserable things I’ve witnessed. That’s like not stopping the dive against Georgia Tech. You watch Georgia Tech through the years, and then how many times have you seen that fullback just right up the middle — the play that everybody hates. ‘Why do we keep running it up the middle?’ and it’s been very effective for Georgia Tech.

“Well, if you’re on the defensive side, that’s about as bad as it gets to have to witness that fullback up the middle — that’s what the shovel is for teams that don’t run the triple option.”

Venables then went into full coach mode as he described how to stop the shovel.

Wake Forest tried the shovel pass and Clelin Ferrell almost decapitated the receiver. South Carolina tried it with Hayden Hurst and failed miserably. Others tried it. And failed.

“I think we had good success after Ohio State, Virginia Tech, South Carolina — Alabama was smart enough not to put it in — Wake Forest,” Venables said. “If you see it again, zoom in on Coach V and you’ll see how I feel about it. And when we stone it, you’re going to see a very small celebration.”