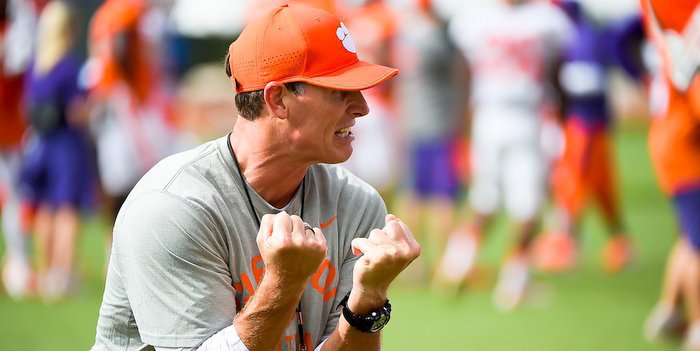 The defense, not so much.

The Tigers ran 120 plays inside Death Valley Saturday, and it was a banner day for the offense.

There were defensive highlights as Tre Lamar and J.D. Davis led the tacklers with five apiece. Linebacker Ben Boulware and freshman end Lasamuel Davis had two sacks apiece. Ryan Carter had two passes broken up and a caused fumble, while safety Van Smith had the only defensive takeaway with an interception during the goal line portion of the scrimmage.

According to Swinney and defensive coordinator Brent Venables, however, it wasn’t enough, and the Tigers are still trying to find the right pieces at critical positions.

“Defensively, We've got to find another corner. Right now we've just got talented guys and we need productive players,” Swinney said. “There's a difference between being a talented guy and a productive player. Big difference. We came right out of the gate and challenged our young corners and they didn't hold up. It's better to be exposed and learn now than three weeks from now, so that's why you practice and you challenge these guys to see where we've got work to do. Right now we've got to find another corner that will be consistent and play the technique and the fundamentals of the position. The first couple of drives, I thought our first defense played really pretty well - 10 guys - but we have one guy giving up big plays.

“We've got to get that corrected and it's really just a matter of being focused because they aren't even competitive days. It's one thing if they make a competitive play and it's another thing when you are disciplined with your technique and your eyes and your fundamentals. That's the biggest disappointment that I saw defensively. I also saw a couple of guys that I'm counting on not give the effort that they need to give and that's expected. It was very disappointing to see that. Some good sacks. Some good pressures. Some good tackles. A lot of good plays defensively. I thought we gave into a little bit today and I thought the big plays that we gave up at corner really kind of set the tempo for everything else going on.”

The Tigers also worked on special teams during the two-hour scrimmage.

“Special teams, we worked a lot of different facets - coverage, returns and really evaluating both sides. We have a lot of tape to watch because we're really trying to hone in on who our starting personnel is going to be,” Swinney said. “Everybody is kind of split right now. I thought Greg Huegel kicked exceptionally well. His kickoffs were very good - they were deep in the endzone. I'm really excited about what I've seen out of him from a kickoff standpoint. He worked really hard. He was either 6-of-6 or 7-of-7 on field goals. He had a big day and it was good to see that from him. Andy Teasdall missed a couple but he's had a great camp and has been very consistent all throughout camp.

“I feel very good about him. Right now we have to figure out who the backup punter is, other than Renfrow. I know he can do it. We've got some really capable guys but they're all inconsistent. We've got a little battle going on right now. I thought Ray-Ray showed some really good things in the return game today. We're trying to look at a lot of guys. We're comfortable with Artavis. We really want to challenge Ray-Ray and he showed some explosiveness. Cornell Powell is a guy we're looking at as well. We really want to get some reps with Renfrow but he was out.”

Next up for Swinney? Making sure the players and coach learn from watching today’s tape.

“It was a mixed bag and a lot of good things we can learn from. Big tape,” he said. “Guys will come in tomorrow after having the evening off - their first day in two weeks. We'll watch all of this tape and see if we can get better from it.”

Venables didn’t mince words when talking about the status of the cornerback position.

“We've got a ways to go. We're not very good right now. We've got some good parts and pieces to the puzzle,” Venables said. “We're still working on cohesion and who can do what. We've got a lot of work to do. I've seen those guys make a ton of plays. We really had three terrific days leading up to today, the whole defense. We've got to make some competitive plays. It doesn't take much out there. It's a lonely island. It was good. I think the experience was good for them - the good, the bad, all of it. It's a growing process to learn how to play - what you can do, what you can't do and how people are going to attack you. Remember I said all of that in the spring game. We'll be alright there.

“It's good that we've got some time, still. We've got good players at that position. We're just trying to teach them how to play the position. We've been really good at times this camp and today it was hit and miss. I still feel good about the guys we have there. Marcus Edmond hasn't been practicing and Adrian Baker is out. I've seen some flashes when it's really good and some other times that we've got to finish plays. I think we still have the right guys.”

Venables on the safeties

“We can move some guys around. I've been real pleased with Denzel Johnson and Tanner Muse. They're still young guys but I think they have a chance to be real good players. They're not great right now, but they're okay. They're both guys that are physical and long and give you good presence there. K'Von Wallace has played a little bit there as well. Korrin Wiggins, I was remiss in not mentioning his name because he's done a bunch of things and has been pretty good so far in camp. He can play the nickel and both safety positions.”

Venables on the linebackers

“I think it has a chance to be pretty solid. There's a host of them. Obviously, they can't all be two's or one's. I think Tre Lamar has at times this camp played like a one. Jaylen Williams had played like a one and he can play outside or inside. J.D. Davis has been consistent. Shaq Smith has shown some improvement. Jamie Skalski has been a guy that's flashed. He is a guy that finds the ball very sudden and plays fast and doesn't get overwhelmed. For a guy who just got here this summer I've been really pleased with his progress. He's a little bit more athletic than a young Ben Boulware - a guy that likes contact, finds the ball. Jamie plays long. Very athletic and his soccer background shows up - super hips and feet. He can really explode. Very strong. I've got to figure out if he's a guy that you play or not. He can run and he can strike. He's very intelligent and he's got good instincts.”

What he learned from the scrimmage

“Our guys at safety have really improved. Trayvon Mullen has really improved. K'Von Wallace is a player. Tre Lamar has really shown he can fill in well for Kendall Joseph. Those are probably the biggest things that we've learned with our guys. Korrin Wiggins has come back and shown his feel for the game and his ability to play multiple positions.”