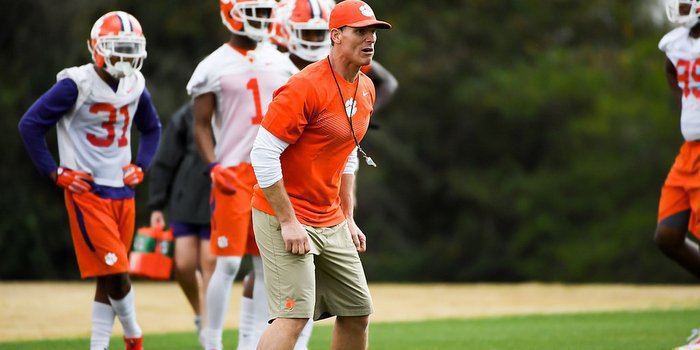 Venables says he can't wait to evaluate the tape

CLEMSON – The Clemson Tigers will kick off the season in three weeks against Kent St., and observers got an early preview when the team scrimmaged in the heat Saturday in Death Valley.

“Good conditions today. Probably was exactly what Death Valley is going to be like when we play Kent State, a good steamy day,” Venables said. “It was a good and competitive day and we ran a lot of different situations trying to evaluate a lot of guys. Can’t wait to evaluate the tape. The guys played hard, tough and it was a hard scrimmage and other parts we didn’t perform very well. A ton to work on and a lot to improve at mentally, but it has been a good camp up to this point.”

The defensive line is expected to be a strength of the defense, and Venables said that group showed flashes Saturday.

“There were some good plays here and there, but I don’t know how they played overall. I thought our defensive line, the first group, really showed up and that was probably the main group,” he said. “I didn’t see glaring big issues. We've got to clean up some tackling and get better positioning at times. We've got to leverage the ball better in some short yardage and we can’t get knocked back.

“Everybody I have talked about, there wasn’t anything different today. Clelin has looked good, Christian has looked good and Austin Bryant is better than he has ever been. He’s just got to line up onsides when he is supposed to. Tre Lamar has been noticeably better and I like how Van (Smith) and (Tanner) Muse have done. The corners have been good at times and other times not so good. Ryan Carter is a versatile guy, Dorian O’Daniel has done well.”

“He’s working. He is better than he has been and hopefully, that will continue. He’s active, hard to block and doesn’t stay blocked. He’s been solid.”

“He really had a good last half of last season or ¾’s of the year and it has picked up. He has done a great job of leading and knowing what to do, performing, competing and being a detailed guy.”

“Well, he also can play. He could play. We aren’t recruiting anybody else right now and other guys won't be here until mid-year. We've got what we've got and we’re pretty good there, but not real deep. We've got to get some young guys to grow up, but I am excited about the group of guys that we have there.”

On LeAnthony Williams and AJ Terrell

“I don’t know about LeAnthony, but I did see AJ show up a time or two. Sometimes for the field corner, if you don’t notice them, then it is a good thing and the boundary corner gets a little more action. So I saw AJ make a few plays and he had good positioning. LeAnthony has looked good at different times throughout camp as well, but I did notice AJ a few plays.”

On energy during the scrimmage

“It was good. Our guys came ready to perform. The sun came out and they didn’t wilt until right at the end and didn’t finish as well as you would want them too, but otherwise, it was good.”