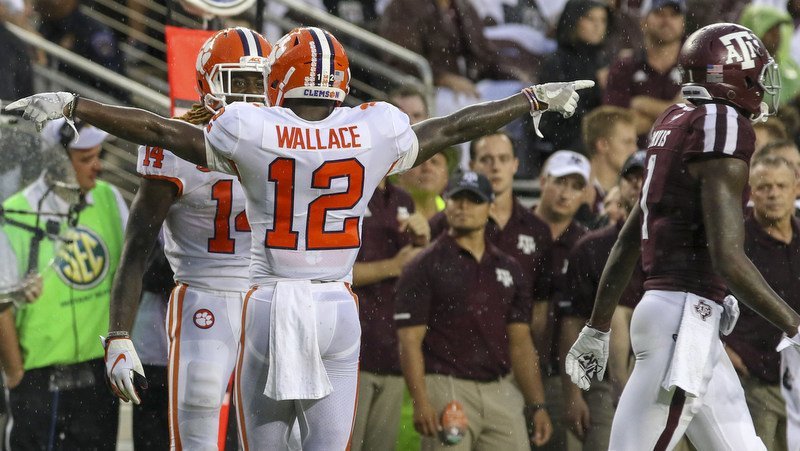 K'Von celebrates near the end of Clemson's win over Texas A&M (Photo by John Glaser, USAT)

COLLEGE STATION, TX - The Clemson Tigers escaped College Station with a 28-26 victory over Texas A&M Saturday night. The game came down to a two-point conversion, in which safety K'Von Wallace intercepted quarterback Kellen Mond to seal the deal for the Tigers.

It was a tale of two halves for the Clemson defense, as they only gave up 142 yards at the end of the first half. Texas A&M came out firing on all cylinders in the second half, putting up 359 yards of offense and 23 points.

"It was a tale of two halves. You have to give Texas A&M a lot of credit. We have a million things to correct. Trusting each other and knowing where guys are at. This will carry a long way moving forward," Venables said.

A key play in the game came when Wallace forced a fumble right before the Aggies were about to score and the ball went through the back of the end zone for a touchback. Defensive Coordinator Brent Venables was impressed with Wallace's effort.

"What a great play that was. It's a great lesson to never give up on a play. It can make a difference between winning and losing," Venables said.

Despite the constant pressure from Clemson's defensive line, the Tigers struggled to take down Mond, who passed for 430 yards.

"Credit to Texas A&M. Their quarterback and receivers made some unbelievable plays," Venables said. "They got in a good rhythm in the second half and we didn't play complimentary football at all."

Clemson's secondary struggled throughout the second half, struggling to stay with Texas A&M receivers. Despite the looks of it, Venables sees a lot of positives from the secondary but also sees room to improve.

"I am so proud of our guys for playing so hard for so long," he said. "They were good enough tonight to where everyone kind of took their turn (resting). There is no question we have to get better. We got exposed at some times tonight."

This game is a building block for the Clemson defense to build off of heading into the remaining ten games. There was good and there was bad, but this defense has the talent to prevail.

"It's just discipline issues and getting the little things right. It's a great learning tool," Venables said. "It's a tough win. To come down on the road against a very talented team like A&M."

Clemson has a chance to work out their kinks next week as they take on Georgia Southern back in Death Valley.