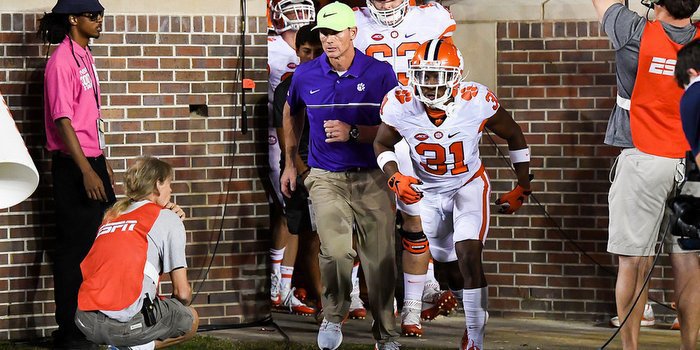 Venables value to the program goes deeper than wins and losses

I was in the car and headed to Clemson for football interviews Monday morning and tuned into one of the national college football radio shows. One of the hosts of the show I was listening to was talking about second-ranked Clemson’s chances in the College Football Playoff, and mentioned that Brent Venables’ defense deserves just as much credit as the offense in getting Clemson to this point.

He then said that Venables has been the nation’s most valuable assistant coach over the last five seasons.

And, unlike other assistants who take a job with an eye already on their next stop, Venables is content to coach Clemson’s defense and not interview for every job that opens up. And that, in a nutshell, makes him even more valuable to what head coach Dabo Swinney is building.

Swinney said Monday that Venables deserves every bit of recognition thrown his way.

“Absolutely. He's as good as there is. Unbelievable what he's done here in every regard. It's been a great fit for me, for him. We've had a lot of fun,” Swinney said. “We've had fun working together. He has been awesome for our staff. Marion Hobby is our co-defensive coordinator and doesn't get the credit he deserves. Dan Brooks and Mike Reed and our support staff - all those guys. Brent sets the tempo. He has been incredibly consistent. And he's grown. It's been fun to watch him grow. He didn't know a lot about Clemson or me when he came here. It's been fun to see him settle in here and do a phenomenal job. He brings that mentality that you want to have day in and day out. He's just incredibly committed.”

Venables value to the program goes deeper than wins and losses "

Swinney said he thinks Venables is ready to be a head coach but is also too focused on the job at hand to worry about every job opening.

“Absolutely. Why wouldn't he? There are a bunch of guys on my staff who would make great head coaches,” he said. “It's one thing to be a head coach and one thing to be a successful head coach. Brent is a guy who's blooming where he has been planted. I think he wakes up every day trying to think about stopping the running back we're playing that week. But yes. If it happens one day, it'll happen.”

Venables said he doesn’t shop himself around.

“I don't put very much time into it at all. I just control what I can control, and that's here and now,” Venables said. “I love what I do and wouldn't trade it for anything. I am a firm believer in fate, and I am not out trying to shop myself around. I just value what I have and try to get a little bit better every day at what I do.”

In a nutshell, he’s perfectly happy at Clemson.