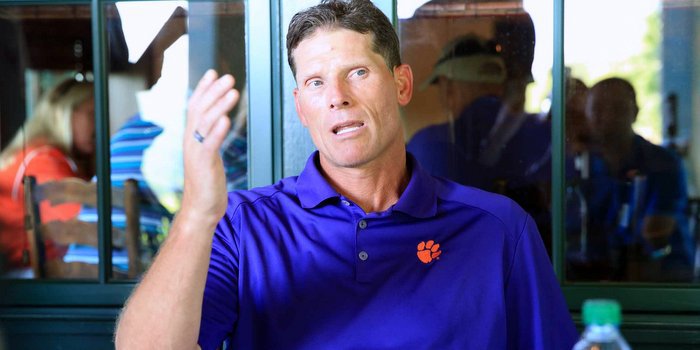 Venables expects Auburn to put up a fight Saturday night

CLEMSON – Brent Venables expects a dog of a fight between two cats Saturday night in Auburn.

Clemson and Auburn face off at 9:05 p.m. on ESPN in Jordan-Hare Stadium Saturday in the season opener for both teams, with Clemson favored by a touchdown over the home team.

Venables, Clemson’s defensive coordinator, expects it to be closer.

“Auburn has a bunch of good players. They don't have slackers,” he said earlier this week in the WestZone. “They've recruited really, really well on both sides of the ball. In this type of game, you have to have a road dog mentality. Not a dog like an underdog, but just a dog, dog, grind it out mentality.”

Auburn announced that sophomore Sean White would start at quarterback following a camp battle between White, Jeremy Johnson and John Franklin, III. White started seven games last season and was 83-of-143 for 1166 yards with one touchdown and four interceptions.

Venables expects to see more than just White, but he also thinks White has the tools to lead Auburn to a win after recruiting White for Clemson.

“We expect to see or think there's a chance to see any of them. Sean White is a terrific player,” he said. “We recruited Sean - I recruit south Florida - and I still have a video on my phone of him making throws in a 7-on-7 at practice while he was at Chaminade before he transferred and brought it back to our offensive guys. He has a very quick release, really anticipates the holes in coverage. He's a tough guy. Smart and competitive. He's sneaky quick, a little bit like Schuessler.

“He can get them out of trouble. Very confident and firm and strong in the pocket. He got snakebit and had the injury during the season a year ago, but they were very competitive in the fourth quarter of all their games. Sean is a good decision maker, and it's not a surprise to us that he was named the starter. He's a quality, quality player. He's got that 'it.' He's confident, and he has skills.”

All eyes will be on Clemson’s defensive ends as they try to contain Auburn’s read-option run game. Clemson lost two defensive ends to the NFL Draft in Shaq Lawson and Kevin Dodd, and their most experienced end (Austin Bryant) broke a bone in his foot late in fall camp and will miss the opener.

“At defensive end, we lost two first round type of guys,” Venables said. “It is what it is. We really like the players that we have there, and we think they have a really bright future. We just have to grow them up there. We can hold our own there.”

“Nothing about defending offenses today is easy. It's more difficult now than ever. Back in the early 90's, it was earth-shattering if they took the H-back and motioned the I-back from a near to a far and what are you going to do if they motion them out of the backfield,” he said. “Things have evolved substantially since then. There are option principles in their running game for sure, and they do require a great deal of discipline. But what offense doesn't? They run a split flow with a jet motion, so who's got the jet and how are you going to play the gaps?

“As much as anything and scheme they are very tough, and they've been successful through the years. Coach Malzahn has had as much success as anybody at both the high school and collegiate level, but they also have good players. That's what makes it tough. Just like Barry Switzer back in the day had a triple option that was different than Jim Walden at Iowa St. because of the cat-daddies they had at Oklahoma. Auburn has excellent players. They are young, but we are young at defensive end. They are a little bit young at receiver, but all are highly-recruited and very skilled players. Every week presents challenges, and this has both a mental and physical challenge to it.”