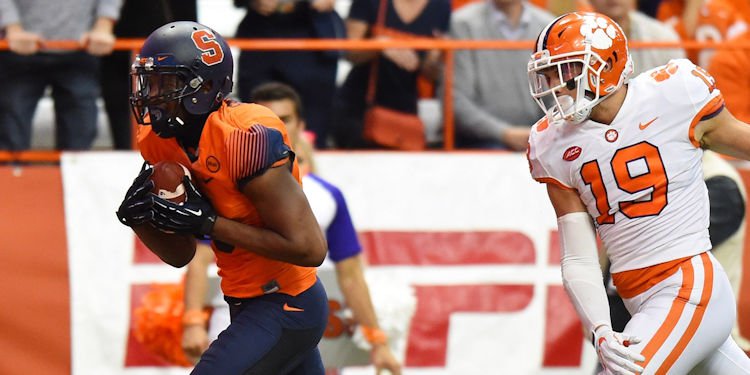 SYRACUSE, NY – Friday night’s Debacle in the Dome might have been the worst a Brent Venables-coached defense has played during his tenure at Clemson, and Venables says the Tigers can expect more losses if the little things aren’t corrected.

Syracuse put up a stunning 28 first downs, was 8-for-19 on third down, 2-for-2 on fourth down, rushed for 162 yards, passed for 278 yards and won the time of possession battle by over nine minutes. It was a long, frustrating and brutal night for a defense that wants to be among the nation’s best.

They weren’t close to being anyone’s best Friday night, and Venables said this won’t be the last loss for Clemson if they don’t get things corrected.

“Not very happy. Obviously, we didn't have them ready to play,” Venables said. “Syracuse came out to ready to play. They played a heck of a game. They coached them up and had them ready and we didn't. We lacked discipline from the get-go. We had personal fouls, PIs (pass interference) all over the place, offsides. If we don't do the little things right before the ball is even snapped and play within the rules this won't be the last loss we have. We have to coach them better and play with more discipline. We did all the little things wrong tonight, and we have to as coaches get them better.”

Syracuse scored its second touchdown on a busted coverage – the Tigers were in quarters defense and the safety looked the wrong as the wide receiver ran open into the middle of the field for a long touchdown. It was that kind of night for the defense.

“Those are lay-ups, man. When you aren't doing the little things right and you're trying to do too much, bad stuff is going to happen,” Venables said. “Against the scout team, Syracuse, the 49ers, anybody will take advantage of you if you don't do the little things right. We did a poor job of tackling, a poor job of keeping our eyes where they belonged, the double moves and we did a poor job of getting them ready to play. Every time we would get back in the game we would line up offsides or get a PI or hit the quarterback out of bounds. All the little stuff you just can't do and play average football, let alone play good enough football to win.”

Following a failed fake punt with 6:10 to play, the defense needed to get one more stop to give the offense time to score. Instead, the Orange ran the final six minutes off the clock. Venables was asked if he was surprised that Syracuse imposed its will on the defense, and his response was what you would expect.

He was then asked if he will use the game tape as a teaching moment, especially since all of the Tigers’ season goals are still in play.

“I don't know if that's what I will say or not. Yes, everything is still in front of us but you have to correct all the little stuff,” Venables said. “Why are we doing the little things wrong? We have to get those things corrected in order to have success. A year ago, we shut them out and this year we couldn't stop them. A tale of two years. We have a lot of work to do, obviously.”