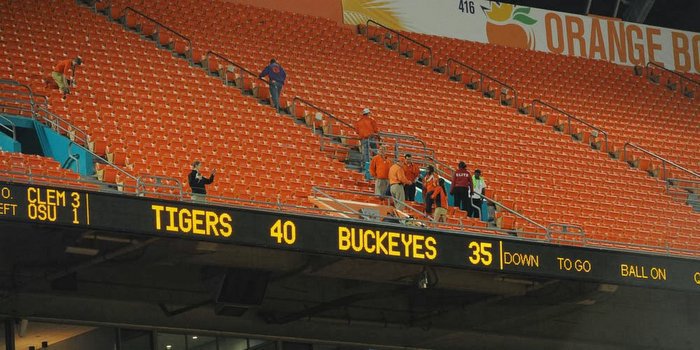 There won’t be a lot of unknowns when the Tigers meet the Buckeyes.

ACC Champion Clemson will face Ohio State in the College Football Playoff in the PlayStation Fiesta Bowl on December 31 in Glendale, Arizona. The contest will kickoff at 7:00 p.m. Eastern time on the New Year’s Eve date and will be televised by ESPN.

Clemson was ranked second in the final College Football Playoff Poll released on Sunday, while Ohio State was ranked third. The teams had been ranked in reverse order in the previous poll, but the Tigers won the ACC Championship Saturday evening with a 42-35 win over Virginia Tech, while the 11-1 Buckeyes were idle.

The teams are familiar with each other – Clemson head coach Dabo Swinney and Ohio St. head coach Urban Meyer are good friends, the programs have visited each other in the past to pick up new ideas, and they go head-to-head for many of the same recruits.

Meyer told the media Sunday that he knows all about the Tigers.

“I know their team very well because I know their coach,” Meyer said. “I know most of their coaches, too. Excellent staff, excellent head coach, and they're loaded. I know exactly the players because I bet on both of our rosters, Clemson and Ohio State were in that conversation and Alabama.

“We know them, have a lot of respect for them. We lost that game. It was a great game if I remember. Brain cells are gone, too. We know exactly what we're getting into. I watched it last night. The skill set on offense is over the top. They're all NFL players. They have one of the top, maybe the top or top two or three players in America in Deshaun Watson. They go fast. They're creative on offense. I think they’ve got one of the best defensive coordinators in the country. They're very multiple on defense, not just one defense.”

“It all starts with personnel. I haven't seen it, but I'm going to find out the next few days,” Meyer said. “I would imagine them and Alabama would be the No. 1 team as far as NFL prospects in the country right now. I got to watch them last night. I know Clemson. I know Clemson very well. I study Clemson just because I like what they do offensively. I know their players from recruiting. I know their staff.

“We haven’t in the dug into them yet as far as game planning. But I have a pretty good indication of what they are. As talented a team as there is in college football. It's going to be a good matchup. Our secondary is very good. From everything I'm hearing, these are the three or four best receivers we'll ever face. Obviously a great quarterback, a nice balanced offense. That side of the ball is going to be a great matchup with their skill against ours.”

“It was over. We tried to get involved. He committed early, early, early,” Meyer said. “I want to say sophomore year, out of Gainesville, Georgia. Not a good player, great player. Not a good person, but a great person. I know his coach, high school program. We tried to get involved. They did a good job locking him down, I want to say, his sophomore year in high school.”

The two head coaches spend time together in the offseason.

“He's obviously a great coach, great recruiter, Meyer said of Swinney. “He's a good friend. His wife and I and Shelly are very close. Every year we get together on one of those Nike trips. I think we have a lot in common. We have a lot of the same beliefs. I have a lot of respect for Dabo.”