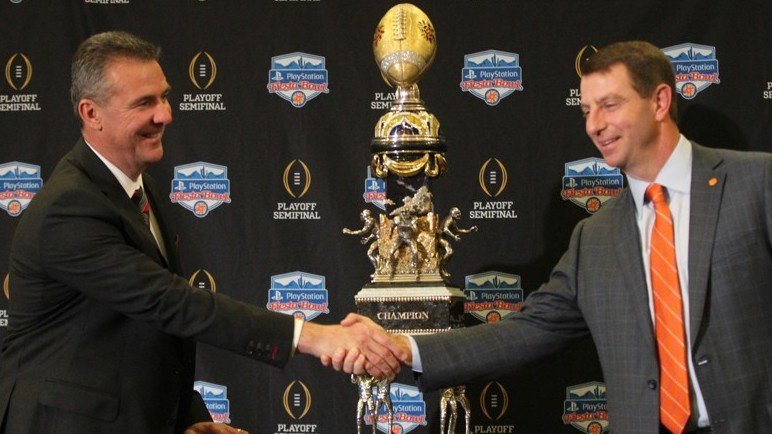 Swinney and Urban Meyer shake hands before the Fiesta Bowl

The situation at Ohio St. with head coach Urban Meyer and former assistant coach Zach Smith highlights the win-at-all-costs attitude that permeates college athletics at the highest level. For Clemson head coach Dabo Swinney, the love of winning will never surpass the love he has for his players and coaches.

The Board of Trustees at Ohio St. suspended Meyer last week for failing to properly oversee his program. The suspension is for three games but the ramifications of the punishment will be felt far longer. Add in the fact that Maryland head coach D.J. Durkin is on administrative leave following the death of one of his players, and many might think the game of college isn’t healthy.

“I think that college football is such a special opportunity for so many people— just provides so many opportunities and joy for so many people and that hasn’t changed,” Swinney said. “I just think that we live in a world today where there’s so much exposure. I think the game is great, probably as good as it’s ever been. I think there’s so much good, but in the world we live in today with social media and all that stuff the bad really gets exposed — and I think that’s really good. I think that’s one of the good areas of social media is that it exposes the bad quickly. It’s also bad at times because people can paint with a broad brush and it’s all bad, but it’s not.”

Swinney went on to say that there are always bad things that happen in sports, but coaches have to make a conscious effort to make sure every player they come into contact with has a positive experience.

“Twenty years ago there was bad things that happened, 20 years from now there’s going to be bad things that happen because there’s people involved,” Swinney said. “There’s always going to be mistakes and disappointments and bad decisions, but as far as just the sport, I think it’s a great sport that provides so many opportunities for so many people and I’m glad to be a part of it. I try to do everything I can every day to try to focus on doing the right things here at Clemson. Hopefully, we can continue to develop our guys on and off the field and help create opportunities in life through their experience here.”

Swinney built the Clemson program on a culture of love, telling his players before the 2016 National Championship Game that they were going to win because they loved each other. The Tigers did win, 35-31 over Alabama in one of the most thrilling games in college football history.

Recruits and their families come away from a Clemson visit impressed with the family atmosphere – all of the coaches’ and players’ families are invited to Wednesday night supper during the season – a family feeling that isn’t just lip service, it’s a way of life.

Unlike Urban Meyer, Swinney gets what is important.

“I’ve known of situations where they don’t really love the guys — it’s more the love of winning,” he said. “Ever since I’ve had this job, I’ve just focused on — I mean, I want to win as bad as anyone, but I’d rather lose trying to do it right than win knowing that you didn’t. That’s the way I’ve built the program, the philosophy that I’ve had here and I just want to love our players. It’s always going to be some setbacks and things like that.

“But for us, I just want to make sure that these guys have the opportunity to go be successful when the air goes out of the ball and that’s how we’ve done everything in our program.”