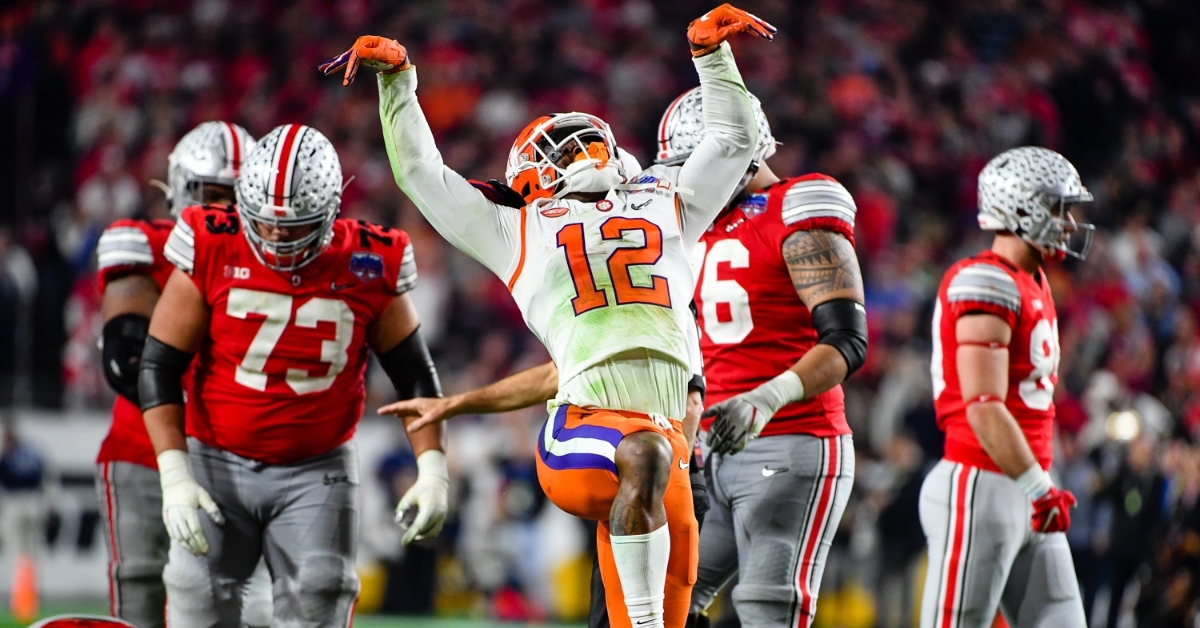 K'Von Wallace does his Karate Kid impersonation against the Buckeyes.

Clemson will be in a familiar, and comfortable, spot when they take on LSU in the National Championship Game in New Orleans on Jan. 13th. The underdog.

Clemson (14-0) faces off against LSU (14-0) in the Superdome in what will in many ways amount to a home-away-from-home game for the Bayou Bengals. Tiger Stadium is exactly 81.4 miles from the Dome and you can bet that the hometown team will have the advantage in numbers. LSU is also favored by 5.5 points.

The long-distance and large Ohio State alumni base in the desert made the Fiesta Bowl a home game for the Buckeyes – the stadium was 70 percent Ohio State – so the Clemson players are used to being outmanned on the road.

“I guess you could say we're pretty comfortable with it. We don't really look too much to like the outside noise, whether we're an underdog or whether we're the team to beat in a particular game,” linebacker Chad Smith said. “I mean, we just focus on what we can control, focus on our preparation, and LSU is a great team. They're here for a reason. They've got a great offense, great defense, all-around team and program, so it's going to take a lot from us in our preparation to be able to have an opportunity to beat LSU in the championship. But it's definitely going to be a challenge.

Quarterback Trevor Lawrence said it doesn’t matter who is favored.

“Being here two years now and playing in a few games, you just see how much it doesn't really matter who's the favorite, and I think we as a team really understand that,” Lawrence said. “Not necessarily that we take offense to it, it's just like it really doesn't matter who the favorite is. You've got to go play the game. The game is going to be won on January 13th. It's not won before when all the odds come out. You've got to play it. So I think, like Chad said, you have to prepare, and whoever prepares the best and plays the best on Monday is going to win the game.

“This past game honestly there was a ton of Ohio State people there, so it'll be -- it might be a little bit more LSU than Clemson compared to Ohio State-Clemson, but even that game was probably 70-30 or close to it out in Arizona. Like even that, too, it's nice to have a big crowd there for you, but even then, you've still got to play the game. The game is won on the field. It'll be a cool experience, though, for sure.”

Smith said the game will be on the field, not in the stands.

“The game is won on the field. It's going to be interesting to see what the ratio is because last game it was definitely like 70 to 30 Ohio State,” Smith said. “So, it'll be interesting to see. But I know we've got some of the best fans in the nation, and they'll do their best to travel out to that game for sure. But we don't really look at it too much about having to do with much of the fans or who's going to be in the stands. Really it just goes back to our preparation and our focus and how we execute on the field. But it'll be a fun environment either way. It's going to be cool playing LSU in Louisiana, in New Orleans, so it's going to be a fun game.”