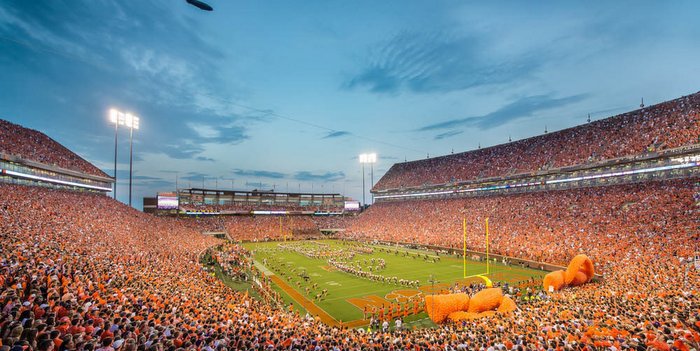 Death Valley at night is a special place

A little after eight Saturday evening, the magic will start.

Clemson and Louisville fans alike will descend on Clemson early Saturday morning, the siren call of a College GameDay too much to resist. Ahead lies a full day of watching other games, tailgating, meeting up with friends and enjoying what looks to be a gorgeous early fall Saturday afternoon in the foothills of South Carolina.

In every head, however, there will be a clock, a countdown timer of sorts, where each person mentally ticks off the hours, minutes and even seconds until two top-five teams face off in a battle for Atlantic Division supremacy.

The fans will leave their favorite tailgate or parking spots as the evening sun begins its daily descent, the Clemson-orange orb falling ever so slowly behind the Oculus and then the northwest corner of the stadium before disappearing from view over Lake Hartwell.

In groups of two or three and then larger and larger lines, the fans will begin to file into Death Valley as the Memorial Stadium lights begin to take effect, and the atmosphere will grow from some form of tantalizing anticipation to a sizzling electric current that is more visceral than real.

The teams will take the field for pre-game warm-ups, the preparation ramping up with an intensity that matches the number of fans that begin to swarm to their seats. Clemson head coach Dabo Swinney will finally gather his team near midfield, they will lock arms and begin their inexorable march to the goal line for Victory Walk, a sight seen by only a fourth of the fans who will be in their seats just thirty minutes later.

The stadium will begin to fill, the pregame ceremonies, prayers, and anthem will be come and go, and something more tangible than a feeling will begin to appear. The players and coaches will leave the Clemson locker room around 8:10 and file out of the gate inside the home tunnel and board the buses that will carry them on the short but important ride around the stadium.

The flash of cameras and cellphones will light the way, complete with the sirens and flashing blue lights of the South Carolina Highway Patrol, and the Clemson football team will exit the bus for the next journey – a trip down the iconic hill and onto the Memorial Stadium playing surface.

Tiger Rag will play amid an orange explosion of balloons, the cacophony of sound filling the night air. Waiting at the bottom of the hill will be Louisville, a team that has quickly become the media darling of the 2016 football season. Leading the Cardinals will be dynamic quarterback Lamar Jackson, the young signal caller whose style of play has seen him compared to Michael Vick and RGIII.

The Cardinals are the trendy pick to win this game. ESPN’s Lee Corso will undoubtedly don the head of the Cardinal mascot when he makes his picks at noon on GameDay, and that’s ok. Be glad the Cardinals are favored and picked to win.

That means Clemson has things right where they need to be.

For whatever reason, Swinney, and his group haven’t been dancing this season. Being the favorite, the team that gets everybody’s best shot, is hard. The adage says ‘Heavy is the head that wears the crown.’ The Tigers own the ACC Atlantic crown, and they own the crown that marks the champion of the Atlantic Coast Conference. The usurper to the crown, that aforementioned trendy pick, awaits to take the crown away.

And that’s ok. I went back and looked at last season’s rankings. Clemson was nowhere to be found in the top ten after week four. Ohio St. was the presumed favorite to win it all and ranked number one. Ole Miss and TCU and were ranked in the top four and the media pundits were sure both teams were a shoo-in to the College Football Playoff.

Baylor, Notre Dame, Georgia, LSU and even UCLA were ranked ahead of the Tigers. LSU’s Leonard Fournette? If ESPN had their say, the Heisman Trophy would have been given to the talented running back after week three. He was the national darling. Deshaun Watson? Barely a blip on the Heisman radar.

Week five? More of the same. But someone forgot to mention that the games still had to be played. Giants were slain. Fournette dropped out of the running after his team took a tumble.

This sets up nicely for a Clemson team that needs a boost to get back to where they want to be, and a win over the Cardinals would provide that boost. A win would bring Clemson back into the national picture. Underdogs at home? Clemson has the Cardinals right where it wants them.

For this one week, however, we once again await the magic that happens in Death Valley. What will happen over the next three hours will show the world the pageantry and drama that is college football in the South, and specifically, in Clemson.