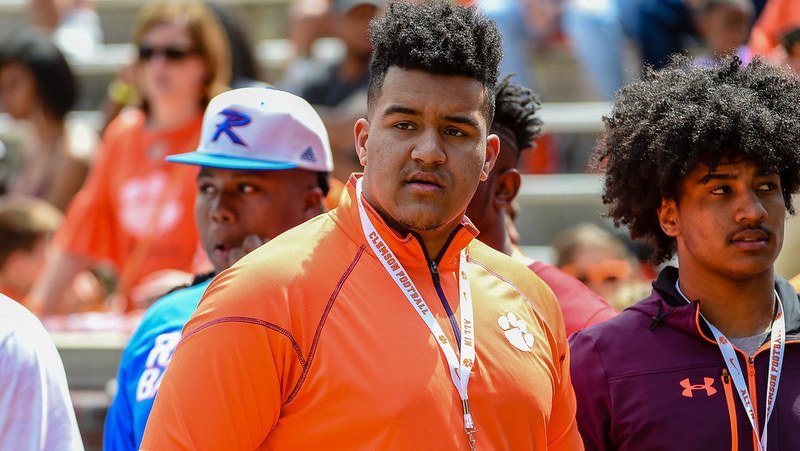 Clemson’s 2020 recruiting class still have several spots to fill, but the current commits – especially the offensive linemen – have already formed an unbreakable bond.

The Tigers have five offensive linemen committed – 4-star Bryn Tucker, 4-star Walker Parks, 4-star Paul Tchio, 4-star Mitchell Mayes and 3-star John Williams – all of whom have formed the backbone of the 2020 class.

Four of the five, including Tucker – who hails from Knoxville (TN) Catholic – were on hand for Clemson’s spring game.

“It was awesome. We had a good time. Seeing the fans, it was amazing,” Tucker told TigerNet Sunday afternoon. “They were going crazy for the team. A lot of players spent time after the game with the fans. It was great getting back with my brothers. We were also recruiting D.J. (Uiagalelei) and Bryan Bresee and all of them. We're trying to get them on board. It was fun. I'm glad I was back with my o-line brothers. It did not disappoint at all. Nothing disappoints me with Clemson, so it was perfect.

“It was crazy. It was different. Clemson is a special place and everything about Clemson I love. Getting back there and seeing all of the fans and seeing the team get hyped and run down the hill, it was great. I enjoyed all of it.”

It was the perfect setting for the 2020 offensive line commits to continue to cultivation their friendships and strengthen their bond.

“It's good. We've been forming a bond since back in January since I went down there for the junior day,” Tucker said. “It was awesome. Every minute of it, we spent with each other. We make it last until we get on campus and then it will be time to go to work. I'm proud of my brothers. They work hard. I'm glad we're together on the same team.”

There’s a lot of excitement among the fans about what could be in February of 2020, but there’s just as much excitement, if not more, form the recruits.

“We were recruiting some guys and trying to create that bond with them,” he said. “We're happy. If they choose Clemson, we're going to be ecstatic. We're just doing our thing and giving the best love. Even if they don't commit, we're still happy that they got the chance to come and visit Clemson University. We hope they jump on board and we'll be absolutely happy. I like where this class is going.”

Tucker took it a step further in saying that history could be made on National Signing Day.