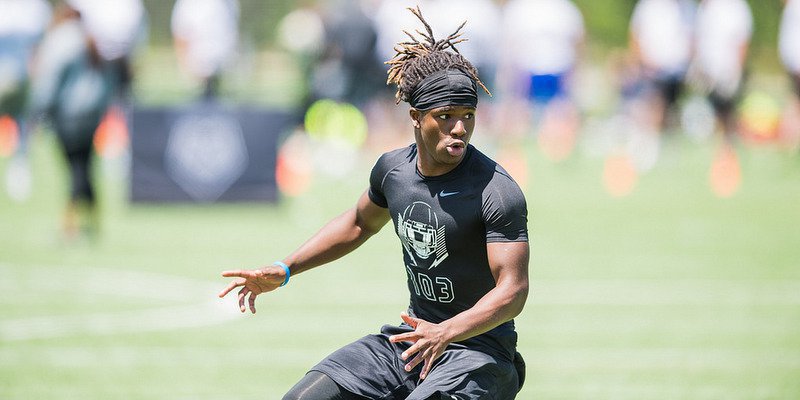 Tyus Fields isn’t certain yet whether he will follow in his brother Mark’s footsteps and suit up on Saturdays for the Clemson Tigers.

What he does know, however, is that he would like to follow the path of his father – the senior Mark Fields – and play football on Sundays. (Tyus Fields’ dad enjoyed a 10-year career as an NFL linebacker for the Saints, Rams and Panthers.)

“My goal is to play in the NFL. Yes, sir,” the four-star, 2019 defensive prospect from William Amos Hough High School (Cornelius, NC) told TigerNet by phone this week.

But it’s first things first for this polite and levelheaded defender. Only a junior, Fields is already fielding offers from Tennessee, N.C. State, North Carolina, South Carolina, Maryland and Penn State, to name a few. Clemson extended the first offer, in May 2015.

The 5-foot-11, 182-pound cornerback made an unofficial visit to Clemson witnessed the Tigers’ 56-3 shellacking of an outmatched Kent State squad in Death Valley. He also returned last weekend for the Auburn game.

“They shut ’em down. (Kent State) just ran the ball!” he marveled. (The Golden Flashes of the MAC attempted just four passes all afternoon.)

As for visiting Clemson, it wasn’t like it was a new experience for him – he has visited his brother Mark, a junior cornerback, and he’s attended head coach Dabo Swinney’s football camp more than once. So he knew what to expect.

“I had been around the campus, so I know what it’s like – it’s pretty nice up there,” he said. “And the coaches are always friendly and open to talk to you.

“They always do a good job, showing love to me at the school, every time I come up. It’s always like a home environment up there when you visit.”

Fields said he was able to spend some time with defensive backs coach Mike Reed (one of his primary recruiters, along with assistant head coach Danny Pearman) as well as defensive coordinator Brent Venables. Fields said the collegial and family environment that surrounds Swinney’s program impresses him the most.

“Everybody’s involved, and they want you to do good and prosper and all that,” he said. “Everybody’s just involved – everybody around the school. … Right now, with the season just kicking off, Clemson is the only school that I’ve visited, but I’m looking to get up to those other schools as the season continues.”

And by allowing him to line up with other talented players, the Clemson football camp experience raised his level of play, Fields said. “You find yourself next to some great competition there.”

The junior defender added that while he hopes to attend another game this fall in Death Valley, he’s mainly focused on this season with the Huskies of William Amos Hough, who are off to a 1-2 start. (They play in North Carolina’s Division 4-AA, in the northern Charlotte suburb of Cornelius.) Fields said he hopes his physicality and determination can help put more W’s in his team’s win column.

“I would say that I’m a pretty physical corner,” Fields said. “But I don’t just play corner – I play free safety and strong safety as well, so I can scrimmage with guys, like as a pretty physical defensive back, as well as a good cover, when it comes time to cover. And when it comes down to the hit, I can do that as well. Yes, sir.”

Fields concedes that brother Mark currently has a slight edge on him in terms of speed: “He’s definitely faster right now, (running a 4.2-second 40-yard dash). I’m at a 4.4 in the 40.”

But as for his brother’s influence on the ultimate decision to commit to a particular program, the younger Fields said that’s a non-issue.

“He doesn’t speak to me about anything when it comes to Clemson,” he said. “He just tells me to continue to go through the process and be open to all schools.”

Fields said the ideal fit for him would be a team that would capitalize on his versatility as a defender.

“On the field, as a player, I just want the college to be able to utilize me – not in every spot on the field, but in spots where I can make plays, even it’s at the corner, or the 3, or the strong spot,” he said.

And he could end up emulating his brother in the classroom, as he is also considering sports communication as a major.

Fields said he plans to announce his commitment at the start of his senior year. And he doesn’t foresee the defending national champions tumbling from college football’s upper echelon anytime soon.

“I can see Clemson continuing to be one of the top programs around.”