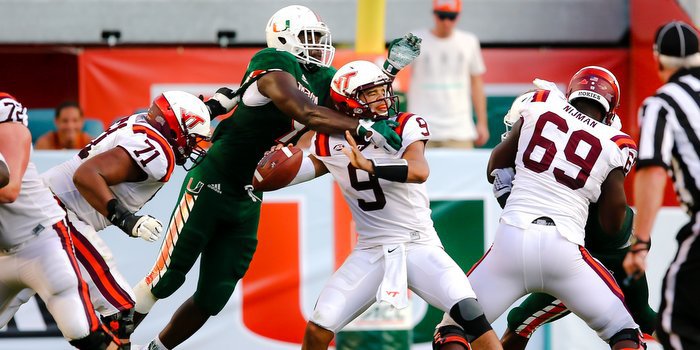 Miami has had an up-and-down first half of the season, but one statistic that has been in the Hurricanes’ favor throughout the first six games is turnover margin.

Miami leads the nation in that stat, sitting at plus-13 in its 4-2 start, which includes a 1-1 record in the ACC. The Hurricanes have forced 15 turnovers while losing just two.

“It’s important,” Miami head coach Al Golden said. “Those are the two areas that we set out to fix – our turnover ratio and our penalties. We’re making progress with our turnover ratio, and obviously, we have to continue to make progress with our penalties. We’re going to get challenged. The ball is going to get challenged this weekend, both up front and down the field. They have an excellent defense. We’re going to have to protect the ball on offense and try to take it away on defense.”

After dropping back-to-back games to Cincinnati and Florida State, the Hurricanes forced four turnovers in a 30-20 win over Virginia Tech last week.

“I don’t know,” Golden said, when asked how much luck is involved in turnovers. “Sometimes like the fumble the other day (against Virginia Tech), deep in their own end, ripping it out wasn’t luck, but the fact that we couldn’t get it, you do have to be fortuitous there in terms of the ball bouncing the right way or you having population around the ball. Here’s what we do believe in, we believe in tilting the odds in our favor by finishing plays, by having population around the ball, those types of things.

Golden expects Miami quarterback Brad Kaaya and the Hurricanes’ offense to be tested by the Clemson defense. Kaaya leads the ACC with 299.2 yards passing per game, but the Hurricanes’ rushing attack is 12th in the conference with 136.3 yards per game.

Clemson allows 114.2 yards rushing and 167.5 yards passing to rank fourth in the conference in total defense.

B.J. Goodson
RS Sr. Linebacker
#44 6-0, 245
Lamar, SC
View Full Profile are really active. We’re going to have to a good job getting hats on them. It’s an excellent front. We have to do a good job, running backs have to do a great job, and it’s a great challenge for us to continue to make progress there.”

On the other side of the ball, Miami is 11th in the ACC against the pass, 12th against the run and 12th overall. Cornerback Artie Burns is a key to the unit, which will be without linebacker and leading tackler Raphael Kirby, who is out for the season with an injury and has been replaced by Juwon Young.

That defense faces a Clemson offense that seems to be hitting its stride after consecutive 500-plus-yard games against Georgia Tech and Boston College. Clemson quarterback Deshaun Watson

“When the pocket breaks down, he can create,” Golden said. “We have to make sure we try and keep him in there and don’t give him second and third opportunities on the play. He can pull the ball at any point in the run game and get you a big one in the alleys. You have to have not just somebody there who can tackle, but multiple people, because he has speed and length and can make you miss. He’s doing a good job of trusting his receivers down the field. He’s got a lot of (explosive plays); he threw the ball for 400 yards last week. Their vertical game was excellent.”

Miami leads the all-time series 6-3, and the two teams haven’t played since 2010. Clemson’s past two trips to Miami have resulted in overtime wins for the Tigers.

Clemson is ranked sixth in both the Associated Press and coaches polls.

“We’re going to have to adjust quickly,” Golden said. “I think they’re ultra-talented. I think they’re deep, as evidenced by their defense. They lost a whole bunch of guys on defense a year ago, a ton of them to the NFL draft, and yet they’re being replaced by a lot of juniors and sophomores. They don’t play a lot of freshmen, so they’re deep. They’re athletic on that side of the ball, they have a good kicking game and an offense with an explosive quarterback that can make the big plays – both with his feet and his arm. (They have an) excellent offensive line, they use their tight ends well, get the ball to the perimeter, good speed – it’s a complete team.

“(They are) worthy of where they are, certainly, from a ranking standpoint.”