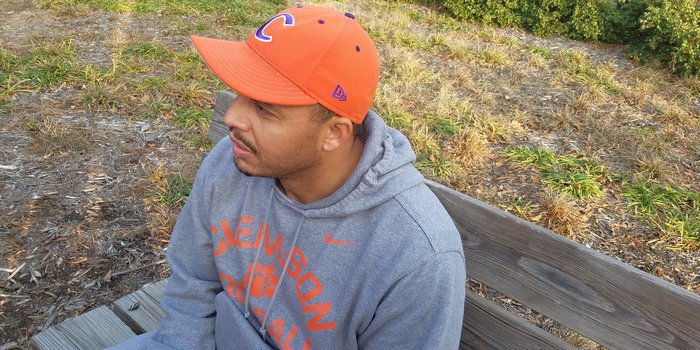 Tony Elliott talks to the media after practice

Finish is the buzzword surrounding the Clemson football program right now, with both players and coaches saying that is their goal heading into the College Football Playoff.

The Tigers didn’t finish last season with a win, ending it with a loss to Alabama in the title game in Phoenix, and offensive coordinator Tony Elliott says the Tigers want to leave the playoffs this time around with zero regrets.

“Finish. We were there last year. For me, I came up six points short with an opportunity to win a national championship,” Elliott told TigerNet after Tuesday’s practice. “The big thing all year has been 'finish with no regrets.' What we have to understand is that if we are back here, it's because we've earned the right to be back here, and now what are we going to do differently this year so that we can finish.”

It means taking care of all of the details.

“Just stay committed to the little things. I think about us offensively; there are a couple of plays I remember,” Elliott said. “One of the basic plays we run every day is the quarterback-running back exchange. And on one of the cleanest-blocked plays we had last year in the National Championship Game we fumbled it. And then Deshaun has hit that sprint out pass a thousand times and the ball sails over (Hunter) Renfrow's head.

“And then (Justin) Falcinelli goes in there, and he blocks for the field goal every time, and there is just a momentary lapse of concentration or a lack of commitment to excellence on every single play and that results in three or four plays losing a championship. That is really what it is, just finishing with no regrets and that we stay committed to our core fundamentals, and we push our guys every single play to make sure we have that attention to detail so that when we are on that big stage those plays don't come up when we don't want them to.”

Tony Elliott talks to the media after practice"

Elliott admitted last season’s bowl game plus one more game was a bit of a challenge, but the Tigers now have the experience to deal with the additional game.

“Now you know what to expect. Everybody knew what to expect out of a bowl trip, you know how to do that, and you know what that looks like,” he said. “But you didn't know what the championship game looked like, so now we understand the quick turnaround in terms of preparation if we are fortunate enough to take care of business and have that opportunity. Now we have another year of experience, and we know how to plan logistically so that there is nothing that is unexpected.”

Elliott on the loss of WR Trevion Thompson

“It's big. We are trying to push that snap count up near 80 (plays), and we like to roll two guys at each position, so when you lose a guy like Trevion who was starting to come on and make some big plays, that means a guy like Renfrow has to be ready to play, or one of the young guys has to be ready to step up to spell Renfrow throughout the course of the game. One of the guys that we think is ready to do it is Cornell Powell. He has kind of moved in there, and we have some flexibility with the older guys, but the guy we are really pushing right now is Cornell. He is a big strong guy that can go and block on the perimeter and yet stretch the field.”

“This is a good thing for us to get back to basics so when we come back and play the game on December 31st we will be ready to beat Ohio St. Our offense is looking good, and everybody is competing. Everybody is looking good out there.

“They are a great secondary. They are lean and strong. It will be a strong challenge for us to go out there and play great on that big stage like that. They have athletes all over that secondary. They play a lot of man coverage and just line up their athletes against your athletes.”

“It was a goal of mine to graduate, but it’s just the next step. A lot of people see graduation as the high point, but I see it as the next step. There is a lot more to come after that.

“They (Ohio St.) try to stop the run, and their secondary is great. But I am in love with the running game. They compare to Pittsburgh because they play a base defense and bring pressure when they want to. But they try to stop you with their base.”