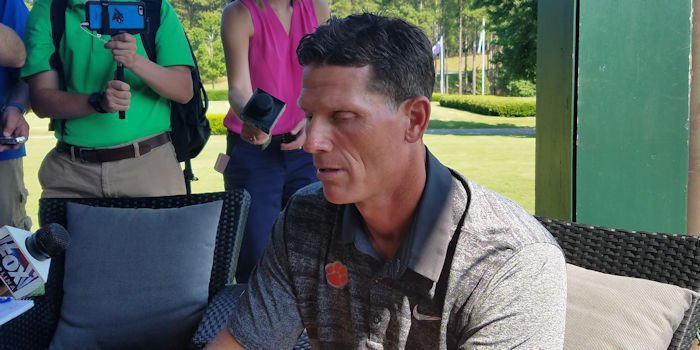 SUNSET – Clemson’s coaches made their way to The Reserve Tuesday morning for head coach Dabo Swinney’s media golf outing, and we have plenty of nuggets to pass along.

I’ll start with new safeties coach Mickey Conn, who told us that Van Smith is moving to the field safety spot, and Tanner Muse and Isaiah Simmons will both take reps at the boundary safety spot.

*Defensive coordinator Brent Venables was his usual animated self, and one of his big messages revolved around the fact that he doesn’t want his guys reading their press clippings and assuming they will all be first round draft picks.

“Last time I checked, there were only 32 points, and they project a lot more than that to go in the first round,” Venables said. “But they haven’t done anything this season. Not one thing. They have to go out and prove it again. Last year’s team proved they could sustain the grind. This team has to prove that as well. We didn’t sustain it in 2015 and fell a game short. That’s a bad feeling.”

Venables downplayed the notion that this year’s linebacker group might be the deepest since he’s been here.

Venables then said that depth is an issue on the defensive line, and when I asked about the loss of transfer Lasamuel Davis and Richard Yeargin, Venables said Davis wasn’t a loss.

“No, he’s not a loss because he had never done anything,” he said. “Scott Pagano is more of a loss. Scott could have come out of the spring as a starter. That made no sense to me. But I wish him well."

Because of depth at the end spot, we could see Christian Wilkins back at that spot at some point.

*Offensive line coach Robbie Caldwell loves center Justin Falcinelli, who he said can take spare parts and put together a computer. He also loves what Gage Cervenka brings to the table. Caldwell says Mitch Hyatt is up to 315 and is stronger and faster than he’s ever been.

Sean Pollard weighed in at 315 last week and also posted his fastest time, and Caldwell said that he had to tell Pollard to stop asking questions. “I told him if he asked me another question he would never play again,” Caldwell said.

*Running backs coach Tony Elliott says that Tavien Feaster is up to 220 pounds and looks better than he has. I get the feeling that Elliott is looking forward to seeing Feaster on the field.

Elliott said that freshman Travis Etienne is raw, a lot like Wayne Gallman when Gallman first arrived on campus. “Remember Wayne showed up and he was running all over the place,” Elliott said. “Travis is going to have to learn. But we haven’t made a decision on a redshirt. That is all up to him, but I am anxious to see what he does in August.”

*New defensive line coach Todd Bates said he watched the National Championship game, and wondered what it would be like to coach Clemson’s stable of defensive linemen. Three weeks later he was doing that very thing, and he called it “surreal.”

He also said that Christian Wilkins was a big help during the spring, helping Bates learn the terminology and the fits in Venables’ defense.

*We will have more in a little bit….headed to talk to Coach Swinney now.