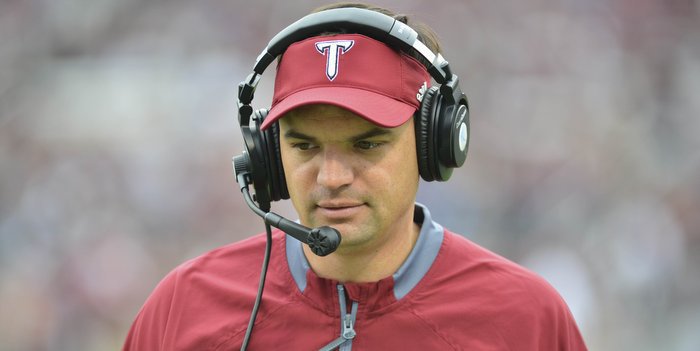 Second-ranked Clemson (1-0) takes on the Trojans of the Sun Belt Conference at 12:30 p.m. Saturday. The game will be televised on RSN (regional sports network). Clemson and Troy have met just once previously. That game was the season opener of 2011, a 43-19 victory at Memorial Stadium. Troy had a 16-13 lead at halftime.

Brown told the media Tuesday that he will be taking a confident group to Clemson this weekend.

“We are playing with the same type of energy; we've got some confidence about us. We're taking the field with belief, we've got a much better understanding of what we're doing in all three phases,” Brown said. “I think it carried over, we'll take a confident group into Clemson. It's going to be fun to see where we are at. We've got some young kids that this is going to be their first time is this type of atmosphere so it'll be neat to see how they react. In my experience in the past, a lot of times when you take guys into those type of atmospheres, for the first time. They raise their game; I'm excited to see that.”

Troy finished 4-8 last season but rolled up a whopping 706 yards on Austin Peay last weekend. The Trojans recorded 383 yards on the ground and 323 through the air, while the defense surrendered just 254 total yards.

This weekend will provide a sterner test.

“Big step up in competition as you know, Coach Swinney and his staff have done a tremendous job in recruiting and when you look at them across the board, they're big, they're long and they're fast,” Brown said. “They're exactly what you'd expect of the No. 2 ranked team in the country. We're looking forward to getting to Death Valley, 12:30 kick. Great challenge, great opportunity, however you want to look at it. It's one of the best atmospheres in college football, should be fun. Offensively they are led by Heisman Trophy front-runner Deshaun Watson. I've been watching him play really since he was a freshman at Gainesville High School in Georgia. Run pass threat, you all know all about him, I don't need to talk about him much. Probably as good a kid as he is a player.

“Solid up front and they're led by a potential All American at center, the running back (Wayne) Gallman he was the first team All-ACC, he's a load to tackle. They got three really good wide outs. Mike Williams, who had a really good game against Auburn, he's All-ACC. Artavis Scott who's explosive, not only on offense but in the return game. They got Hunter Renfrow who's a baller, I like watching him play.

“Tight end is an All-ACC guy (Jordan) Leggett. On defense, a lot of respect for Coach (Brent) Venables we've gone against each other several times. I think he's done a tremendous job since he's got to Clemson. They're big and they're long upfront, several potential pro guys up there playing in that group. They all look the same, interchangeable, they'll run about 10 to 12 in the game. Their WILL linebacker's their leader on the defense, Ben Boulware. Then at corner I thought two kids really stuck out in that Auburn game – No. 25 (Cordrea) Tankersley he was really physical blowing up some screens on the perimeter. Then the safety Van Smith, No. 23, really got down in the box and made some big tackles right at the line of scrimmage at that safety position.

“Special teams, they're solid. They do a really nice job; they've switched up a couple things they did last year on the kickoff return unit. They've got two, really three, guys that they use in the return game. They're all really explosive.”

Brown said he’s faced Venables in the past and expects Clemson’s defensive coordinator to throw more than a few blitzes his way.

“I think what they'll do is, they're always going to outnumber you in the box regardless of your personnel, I think they'll have one more than you can block,” Brown said. “Does a really good job of mixing up his fronts, as far as going from a four-down to a bear front. The secondary, they're good at corner, and so I think, we expect to see quite a bit of man coverage. They're well coached, they do a good job, mixing up when they're going to pressure, when they're not going to pressure. They'll have a plan.

“It's going to be different, a lot of soft coverage last week, I don't expect Clemson to give us a whole lot of room. I think they'll come down and play us on man coverage and press us and get in our face a little bit. That's what they've shown and I think they'll continue to do that. Our guys have got to be, we got to work our release techniques, and we've got to do a better job with our discipline, as far as getting our routes. Sticking routes, leaning on people. You talk about in in practice but once you see it in games it's usually easily correctable.”

The Trojans have a player simulating Watson in practice, but Brown cautions that it won’t be the same as seeing the real thing in person Saturday.

“If we had Deshaun Watson he would be playing, he wouldn't be on the scout team. I don't mean that as a bad question, we've got a kid that we are redshirting, Jaylen Jones, who is similar size wise to him, and he'll do a great job,” Brown said. “I know he's excited about putting on the No. 4 and running around and being Deshaun Watson on our scout team. He'll give us a good look. Here's the thing, the biggest, when you take these and you go play at Clemson or you go play some of these type games. You cannot replicate, you don't replicate it in practice, you don't replicate it even in some other games is the speed. We're going to talk about it offensively, we talk about it a lot. It's a ball security issue, guys are running so well that they're going to get hit blindly for the first time.”