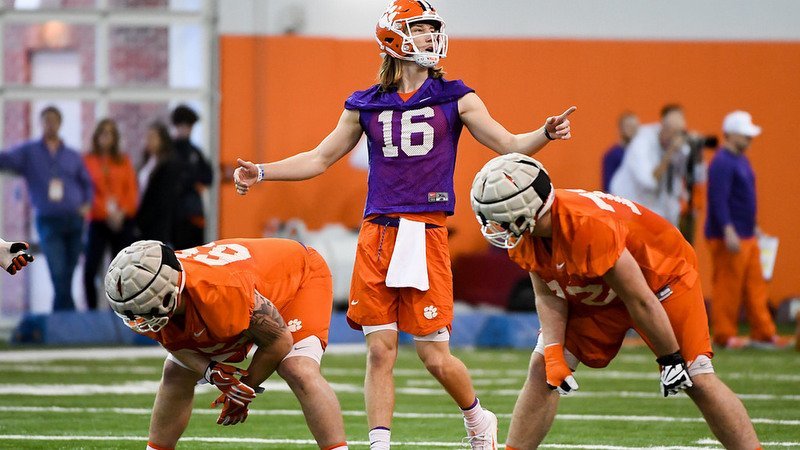 Lawrence told Elliott he was ready for Wednesday's scrimmage

Elliott, receiver of 2017 Frank Broyles Award as the nation’s top assistant coach, has helped lead the Tigers to three consecutive ACC Championships. Since joining the coaching staff at Clemson, Elliott has been named one of the top 25 recruiters in the country along with aiding the Tigers in seven straight 10-win seasons.

Elliott sat down with TigerNet after Wednesday’s practice scrimmage in Death Valley, to discuss the improvements his offense has made.

“They all looked good, all of them had opportunities to lead touchdown drives. It’s hard for me to know who threw what, and who’s doing what because I’m on to the next play trying to figure out when Brent (Venables) is going to bring that safety blitz.”

“That’s probably the thing with him just his calm demeanor, the way y'all see him every single day, that’s the same way he is in the pocket. He just has a natural pocket presence that you just can’t coach, the special ones have that,” Elliott said.

“You know today was an opportunity, and I kinda joked with him that now it’s for real, we’re in the stadium, you’re on the grass, coaches are off the field, you know you’re on your own, and he just kinda said, ‘I’m ready, coach.’ I know there were some situations with all of the quarterbacks, not just Trevor, they probably wish they had a play or two back. That’s going to be the fun part, challenging these guys.”

“Chase gets in there man, and he’s just got that moxie to him, he’s got that ‘it’ factor you know. There’s going to be some opportunities where he’s trying to do too much, and that’s where you have to err on the side of bringing those guys along at the right speed and not giving them too much, because then they’re thinking too much, and getting themselves into situations they don’t need to be in."

“Today was more about evaluation, and not really winning the scrimmage and putting some guys in some tough situations, and man, we really challenged those boundary receivers,” Elliott said. “Trevion (Thompson), Diondre (Overton), and also Tee (Higgins), with some of those intermediate passing game concepts, because I feel like we have two of the best corners in the country that are really challenging these guys. That’s an area where these guys can see the tape and see where they have an opportunity to improve.”

“Cornell popped, he showed up today and made a couple plays. He made a big play down the field, he also made a big play on a third down off of a conversion just with that extended drive.”

“I thought Tee showed up down the field, he finished the two-minute drive the way we wanted to, with a big play to finish up there.”

“In terms of Travis, it’s good to see Travis show up from an explosive standpoint. He made some explosive runs, and that looks like Travis. Now it’s just going to be consistency, can he do it every single day, and can he improve in the area of pass protection.”

“Compete. You know we have to compete because the teams are going to be mixed up and coach has a lot of fun with that, and guys might not be playing next to the same guy they were in spring. Now you got to see some new dynamics, so just go out there and compete, and let’s make sure we don’t use those as excuses to distract us from executing on the level we need to.”