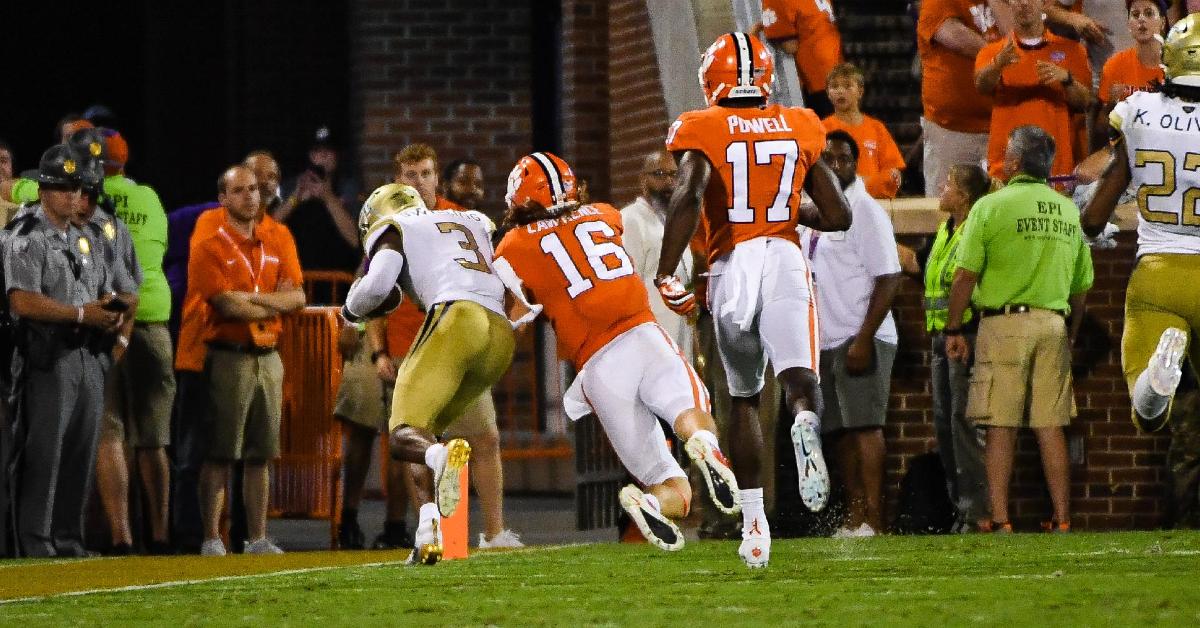 Trevor Lawrence saved a touchdown by knocking Tre Swilling out at the two yard line.

CLEMSON – Trevor Lawrence has made a bevy of big plays during his short Clemson career, but the play that impressed his teammates and coaches Thursday night wasn’t a long pass, a touchdown, or a run. It was a tackle.

It was the kind of tackle that champions make.

Midway through the second quarter of Clemson’s 52-14 victory over Georgia Tech Thursday, Lawrence threw a pass towards the sideline that was intercepted by Tech’s Tre Swilling. Swilling gathered the ball in at the Clemson 43 and had just one player to beat for a touchdown – Lawrence.

Lawrence took an angle as Swilling rumbled down the sideline, then lowered his valuable shoulder and knocked Swilling out at the Clemson two, saving a touchdown. The Jackets tried Clemson’s middle on the first three downs and a fourth-down pass was intercepted by the Tiger defense.

“What a fantastic play by Trevor, the effort to get him out of bounds. That's a winner right there,” Venables said. “He easily could've pulled up on the play and let them have it. Getting him out of bounds, there's a perfect example. We had a play like that against A&M a year ago that ended up winning the game - the extra effort by K'Von (Wallace). We're able to play four downs inside the two-yard line. Regardless of who you're playing, you get four downs inside the two-yard line and get a stop, that's big time.

Co-offensive coordinator Jeff Scott said it was the best play of the night for the sophomore.

“I think his best play of the night happened on his worst play,” Scott said. “Coach Swinney spent a lot of time talking in the locker room, that's how you win ballgames right there. It's not what happens to you. It's how you respond. It would have been very easy for Trevor to say, 'You got me,' and have a half-speed jog over there and give him the pick-six, but right there when your most talented player on your team is willing to give that type of effort and trust his defense to go out and hold them out.

“Even though I was disappointed in the interception where they kind of fooled us with some coverage stuff, that was one of the highlights, his effort right there. That's how you win ballgames and for that to come from one of your most talented guys is a huge message to everyone in that locker room.”

Lawrence didn’t like throwing the interception, but he did like getting a big hit on a defender.

“The coverage that they were running with the safety, I thought I had a quick throw outside and the corner just made a great play and jumped it,” Lawrence said. “He took a chance. Credit to him, he made a great play. Right when I threw it, even before the ball came out, I was like, 'This is going to be picked.' I went ahead and started running and got him on an angle. I was just trying to make a play and give our defense a chance. They liked it. Obviously, I don't like throwing interceptions but it was good to be able to make a tackle and get a good hit on him. It was cool to see our defense come out and hold them right there on the two-yard line.”

Swinney said the play shows Lawrence has the heart of a champion.

“I talk to our guys all the time about that. I don’t expect to see perfection,” Swinney said. “I do expect to see the eye of the Tiger. I want to see the heart of a champion. He gave us a chance to play goal-line defense and get an interception by Denzel Johnson because of that effort. That kind of play sets the tone for everything that we do.”