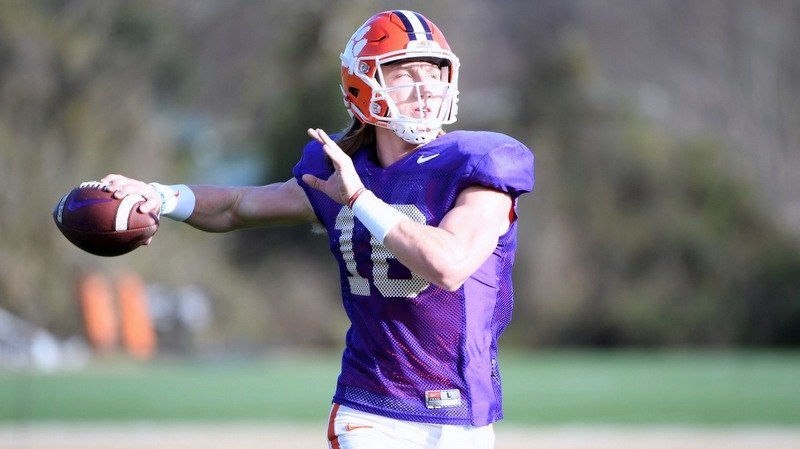 CLEMSON – On January 7, Trevor Lawrence took the sports world by storm with his dazzling play on college football’s biggest stage, but the tall, longhaired freshman just wants to enjoy being a college student and improve his craft.

After completing 20-of-32 passes for 347 yards and three touchdowns and rushing for 27 yards in Clemson’s dominant win over Alabama in the national championship game, many national pundits wondered why Lawrence would ever play another snap of college football, but that thought couldn’t be further from the Georgia native’s mind.

“I personally don’t think I would have done something like that. I think it’s just a different experience being able to go to school with guys your age,” Lawrence said after Monday’s spring practice. “You get to go through this experience of being in college. It’s a grind balancing school and football, but getting to meet new people and making new friends outside of football, I think it’s really important to do.

“That’s one reason it’s cool that people playing football have to stay for three years. I know that other sports like basketball, they can leave after a year. I think it’s cool to stay three years at least, and you get to make a lot of new friends and experience new things. I definitely love being in college. Developing mentally and physically, and just enjoying your time – I think that’s important. A lot of people just try to rush that time, but I just try to enjoy every second of being here.”

Standing at 6-6 and having his iconic golden locks, Lawrence was already easy to pick out in a crowd, but now he’s having to learn about being the certain of attention at all times.

“It’s been different, and things are a little different now. It’s like a whole new platform after winning a national championship – it’s like that for a lot of the guys. It’s an adjustment, but it’s been really good, and it’s cool to get back out here and start practicing again,” Lawrence said. “You just have to be ready going out, and things are a little different than they used to be. You just have to be ready to take pictures and talk to people when you go out. You have to be social when you go out; you can’t just really do your own thing. You just have to pick and choose your own spots.”

Lawrence quickly learned that lesson when an incident during an intramural basketball game went viral.

“I think everything is just a learning experience. You could say you wished you handled something differently, and I do, but like you said, everyone’s watching, and I should be smarter that,” he said. “At the end of the day, we’re playing a game, and it gets competitive. Me and him shook hands at the end of the game. It gets blown out of proportion, but I have to know, just because it’s me it’s going to get put out everywhere and made a big deal of. I just need to be smarter than that.”

“It’s been crazy, intramurals have been awesome. Everybody’s looking forward to it right before it comes up and a lot of the team is playing. It’s a lot of fun just going out there and playing basketball and having some fun on the weekends.”

Lawrence isn’t thinking about his newfound fame but is hoping that maybe he can use his platform for good.

“I’m not trying to think about that stuff too much, because it really doesn’t matter for me. Other people might see me like that, but it doesn’t really matter. It’s not going to affect anything here. I don’t perceive myself as that (the face of college football),” he said. “Hopefully I can use it for good. It’s just crazy now everywhere I go – all the people that come up to me and just want to talk. It’s cool having that platform. It can be a lot if you don’t know how to use it and you’re not ready for it, but I think that I have learned over the past few months how to use it, and using it in the right way and being careful of what I’m doing. I’m really being cautious. As I said, I just want to use it in the right way and hopefully encourage it.”

For now, though, Lawrence is focused solely on learning the intricacies of Clemson’s offense.

“Just learning more – the little ins and outs of the offense,” he said. “I want to know everything that everyone’s doing. I do for the most part, but knowing every little detail of what people are doing, and also being able to have more freedom as far as changes at the line of scrimmage or whatever I need to do just because I know more and I can see what the defense is doing. And then just little things like footwork and timing.”