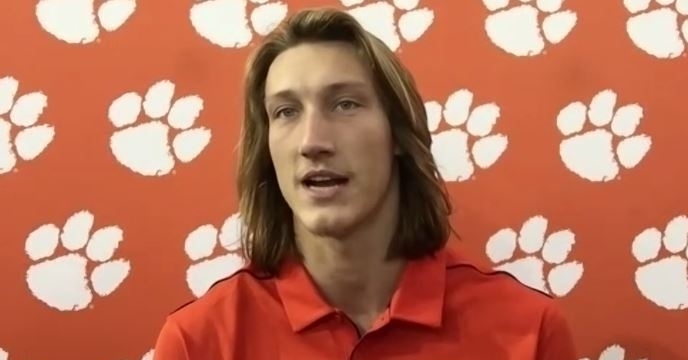 Lawrence says he just loves people and wants to make a difference.

Trevor Lawrence loves his teammates, and he loves people, and his recent foray into social activism isn’t meant as a political statement. It’s a statement he wants to make to show he supports those who are hurting.

Clemson’s junior quarterback met with the media Tuesday afternoon and took questions not only about this weekend’s game at Wake Forest but also about his recent emergence as a leading voice in college football.

A few days ago, Lawrence and several players from across the country pushed a five-step plan for the sport.

*Ensure all of our teammates are registered to vote and have Nov. 3 free from athletic obligations so we can all vote.

*Discuss with our presidents and administrators to further raise awareness about racial injustice and create initiatives to further empower our communities.

*On game days, we will use our platform to raise awareness via wearing shirts, utilizing statements on our helmets and jerseys and playing tribute videos to recognize victims of racial injustice and share our own stories.

For Lawrence, his stance isn’t about making a political statement -- it’s about love.

“I don't want to ever be used as a political pawn. That is not what I want,” Lawrence said. “I just love people and I want to see the advancement of all people, for people to be equal and that is where I stand. Some of the things I've done are some of the best ways I can show that I support my teammates. It's not like I am aligning with one side of politics or the other, it's just, hey, I love my teammates and I love my friends and I see that they are hurting, so how can I support them emotionally and personally but also publicly. These are ways I have been able to do that.

“I am not a civil rights activist or an activist in general, but I just think we all carry a responsibility based on who you are and what your platform is. It's different for everyone. For the love of my teammates and my friends and everyone I know that is hurting during this time, I think it's part of my responsibility to help any way I can. The graphic we posted, that is a collaboration of a lot of different guys, not just me.”

Lawrence then said that the plan laid out by the players is simple and shouldn’t be controversial.

“It's not something controversial, it's just simple things like voting and making sure everyone is registered to vote,” Lawrence said. “And then also little things like helping out our communities and keeping the conversation going between student-athletes and other students and police departments just to improve each of our communities, which will hopefully impact the whole country. It's little things that everyone can rally around and should already be doing, but that was just the thought behind that.”

As the face of college football, he understands who is watching.

“I know there are a lot of eyes on me. Critics, but also younger generations and people looking up to me. So yes, in a way I am conscious of that,” he said. “I want to use my platform in the right way and try to impact people. I am not an activist of any sorts but I do think I have a responsibility to promote equality for the people I love.”

It’s all about finding that common ground and moving forward from there.

“In the end, I think a lot of people want the same things, they just see things a little bit differently. Everyone wants peace and they want to be happy,” he said. “Everyone wants to be unified together and feel like we live in the best country on earth. In the end, that is what everyone wants but it's hard to get there because you have the media and the far right and the far left pushing these different narratives so it's hard to find common ground. So I think all of us (the players in college football) have just said, 'Hey, I know we all have some differences but let's find some things we all agree on and let's start change from there.' I think it's powerful that we've been able to make some decisions as a group pretty quickly on some things we want to see happen.

“I think that is where you have to start - find common ground and something you can agree on. And then understanding each other's differences but also leaving room for people to learn and change their mind to say, 'Hey, maybe I thought his way before but now I've changed my mind.' We just want to create situations where people can grow. We don't want to put pressure on people where they feel like they have to do something but at the same time, I think we all can agree that the country isn't in a great place right now and there is a lot of room for growth no matter what side you're on.”

#Clemson coach Dabo Swinney: “There’s nobody who loves football more than Trevor Lawrence. I can assure you of that.” (Video courtesy Clemson and the ACC)