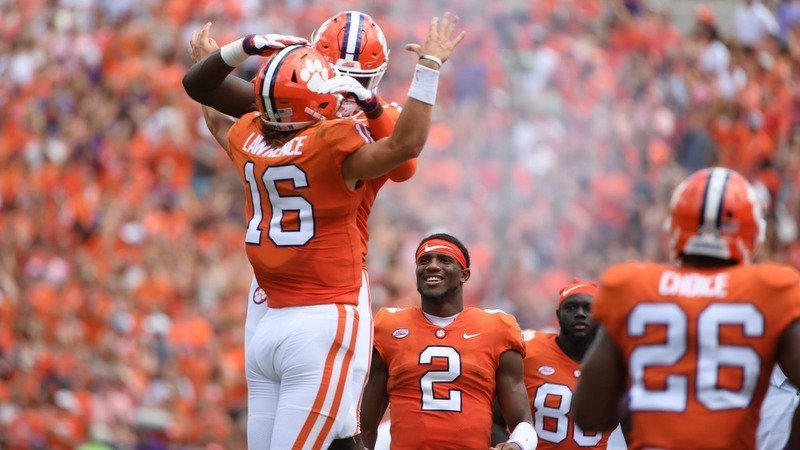 CLEMSON – It took Trevor Lawrence one game to enter his name in the Clemson record book.

Lawrence completed 9-of 15-passes for 137 yards and three touchdowns Saturday afternoon against Furman in his collegiate debut, joining Deshaun Watson as the only true freshmen quarterback in program history to throw three touchdown passes in a game.

The Clemson coaching staff indicated that Lawrence will see playing time when Clemson travels to Texas A&M next Saturday, and Lawrence said he was comfortable with that decision.

“It’s been crazy with people talking about everything. It’s good to get out there and for me and Kelly to split time and both play well,” Lawrence said, “It was good to get that first one under our belt and we feel really good going into the next one.

“I think I played pretty well. I missed a few throws that I wish I would’ve hit. As far as decision making and everything, I feel like it was pretty good.”

Starter Kelly Bryant played the first three drives and put 10 points on the board before giving way to Lawrence, who said he doesn’t mind splitting time with Bryant.

“It’s been really good. It’s definitely made me better, and I think it has made Kelly a lot better, too, with us competing,” Lawrence said. “We have a good relationship, so it has been really good for us and the team. The coaches told me this week, and we had a plan, so I was ready for that. It worked out well. We’ve been doing that (rotating) in practice so we’re used to it, and I’m used to it. It wasn’t much different than practice.”

Lawrence broke many of Watson’s passing records as high school player in Georgia and entered Clemson with high expectations. Like Watson, Lawrence doesn’t pay attention to the outside noise.

“I don’t really worry about that stuff (expectations). It’s just nice to get this first one under my belt,” he said. “I have a long season ahead, so I’m just trying to get ready for that. Trying to do that and do school and everything is just too much to put yourself if you worry about what other people are saying, so I’m not really worried about that stuff.

“I didn’t really feel like I had anything to prove. We’ve been competing all spring and all fall. We’ve been handling everything on the field. I didn’t feel like I had to prove anything, but I definitely wanted to have a good first game to start the season the right way.”

What did he think about his first time playing in Death Valley?

“Running down the hill was cool. Seeing the stadium full and hearing the fans for the first time was pretty cool. It’s not much different than what we would do in a practice,” Lawrence said. “There’s a lot of fans, obviously, but other than that, it’s just football. At the end of the day, you just have to make plays.”