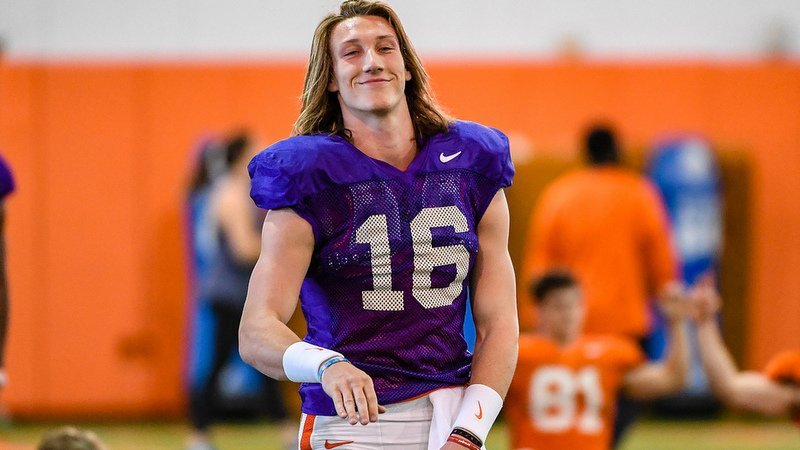 Lawrence smiles during a press conference after the win over Alabama

Trevor Lawrence has taken the college football world by storm, especially after a dominating 347-yard and three touchdown performance against Alabama in the National Championship. Lawrence feels like he was made for those types of moments, but don’t expect the added attention to go to his head.

His faith and team-first mentality keep him grounded.

Lawrence is just 19 years old and isn't eligible for the NFL draft until 2021. Against Alabama, however, he helped Clemson win the National Championship by blowing out Alabama 44-16 at the College Football Playoff national championship game in Santa Clara, California.

Named the offensive MVP, Lawrence completed 20 of 32 passing attempts for 347 yards and three touchdowns. He now sits atop the betting odds as a Heisman Trophy finalist next season but doesn’t feel overwhelmed by pressure. He’s as cool and calm as the day he walked on campus a year ago.

“Yeah, I've said a few times, it's my faith and my family, just the way I was brought up, and then my faith. No moment is too big,” Lawrence said. “I feel like if I just keep myself grounded, I feel like I was made for moments like this and opportunities like these.”

He then reminded everyone that Clemson is about more than just Trevor Lawrence.

“I think the biggest thing is just keeping the team first. I think that's one thing,” he said. “I think all the quarterbacks here at Clemson since I've been here have done that, and as long as you keep that first and just – it's a team game. You come here to play with the team and win championships and do all those things. It's not an individual game, so I think that's the biggest thing when you go into situations like this. That's all I really have to say about that is just don't put yourself above the team.”

Some NFL analysts suggest that Lawrence would be the No. 1 overall pick in the NFL Draft this season if he were eligible, but Lawrence says he wants to enjoy his college experience before thinking about the next level.

“I honestly don't really care about all that stuff. I'm just trying to do what I can in the moment,” he said. “I know I have at least a few more years of college left, so I'm not really worried about all that stuff, and I've got time just to be in college and just have fun and be with my teammates and just enjoy every moment. That's what I'm trying to do.”

Lawrence arrived on Clemson’s campus as Ia 5-star prospect and was rated as the top prep quarterback in the nation by many scouting services, but he said all of those accolades disappeared when he put on a college uniform.

In other words, he had to go out and earn a starting spot.

“Yeah, I just don't – that's just never been who I was, just to act like that. That was never really a thought just because that's not who I am,” Lawrence said. “But yeah, I think it is important to be really intentional, especially coming to a new place as a young guy, and just really earn the respect and stuff – I just want to earn everything I have. I don't ever want to be given anything, and I think that's the cool thing about my whole experience here is just I feel like I've earned the opportunity to be in this situation, and obviously everyone else on the team has worked extremely hard to get here, so just proud of everyone.”