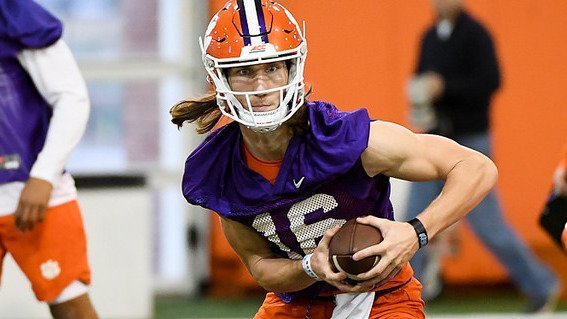 There are many things we know about Clemson’s quarterback situation, there are a few things we think we know, and there are things we have no idea about, at least at this point

We know that the Clemson coaching staff has four talented quarterbacks to choose from in Kelly Bryant, Hunter Johnson, Lawrence and Chase Brice. We think that Bryant, the starter all of last season, will once again be the starter when this season begins. What we don’t know is the depth chart past that, how long of a leash any quarterback will have, or if the starter at the beginning of the season will be the starter at the end of the year.

Those are a lot of unknowns, and even though Lawrence has been deemed by many to be the next great Clemson quarterback, we don’t know when that era will begin. We don’t know if Johnson will be too tough to overtake, and we don’t know if Brice will throw his name firmly into the mix.

That leads to an interesting question…..could Lawrence redshirt? If Bryant takes firm hold of the starting job, it makes sense that Johnson (who didn’t redshirt) but would be an unlikely candidate to do so at this point) would be the second team guy. Brice redshirted last season and will be available to take snaps, so would the coaches consider redshirting Lawrence? Or will he play in some capacity right away and be there in case something happens?

I asked co-offensive coordinator Tony Elliott that question the other night, and Elliott said that the race at this point is too close to call. He also said that the decision belongs to head coach Dabo Swinney and quarterbacks coach Brandon Streeter.

Trevor Lawrence has had his moments early in spring practice"

“I don’t think now is the time to even think about that. You’re trying to prepare all four of them because it’s that close of a race that any one of those guys could end up being the guy,” Elliott said. “Kelly is obviously the guy now but any of the other three could end up being that guy. I haven’t even thought about that, plus I don’t live in that quarterback world. I just try to worry about what we’re going to call and just making sure that all of those guys have an opportunity to compete when they’re in there. I haven’t given it that much consideration. I don’t even know how to answer that one, to be honest with you.”

Media and fans, alike, are anxious to see all of the quarterbacks in Clemson's spring game on April 14, but Elliott said he isn't sure how the signal callers will be divided.

“We haven’t even gotten to that point of discussion yet,” he said. “We’re still just worried about this next couple of practices and just getting evaluation, giving those guys opportunities now that the installation is pretty much done. The last half of spring ball after spring break is really about evaluation, so the next couple of practices, half the practices or more is going to be us off the field letting them play. Then, Coach Swinney will sit down and we’ll split the teams evenly and we’ll go play.”

As of now, according to Elliott, there isn’t really a quarterback depth chart and he doesn’t expect there to be one at the end of the spring.

“I don’t think it’s necessary, especially with the competition that we have. You’ve heard me say it many times with my position that I don’t care about the depth chart because I’m preparing everybody to be a starter,” Elliott said. “I know there’s only one guy out there and somebody is going to be named the starter in the media, but, dude, when you’re out there, you’re playing starter quality reps. For me, the depth chart doesn’t matter. It’s just a starting point and it’s fluid. It’s just on a piece of paper and it could change daily, especially when you get into fall camp.”