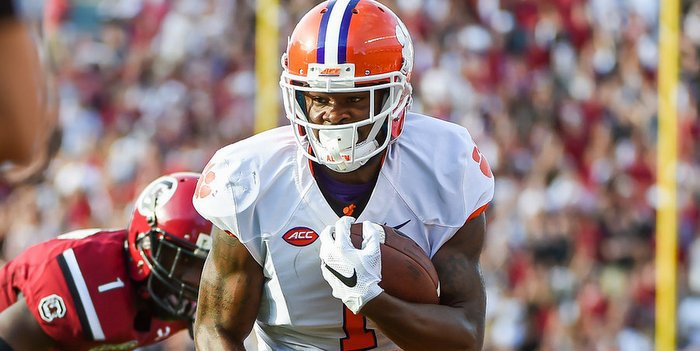 This catch against South Carolina was big for the Tigers

Trevion Thompson knows that Clemson is known for great receivers, past and present. He also knows that the 2016 wide receiver depth chart will be packed with talented and fast players and that one hiccup might mean less playing time.

He’s not going to let that happen.

Thompson played in 14 games last season and had 10 catches for 121 yards. However, he also had one of the biggest catches of the year when he grabbed a 24-yard dart from Deshaun Watson on third down to set up the game-clinching touchdown at South Carolina.

Heading into 2016 Thompson will likely back up Mike Williams at the “9-man” spot, but he knows that all of the spots on the depth chart are tenuous.

“We have a great receiving corps and every day you have to go out there and compete because no one's gonna slack. Once you slack, that's when you keep falling and falling to the bottom,” Thompson told TigerNet. “Every day is competition, but my main goal is to become consistent and have that mindset that I'm going to go get it. I want to become more of a player of the game and have more knowledge of what my assignment is.

“I feel like I've improved and accomplished some of my goals, but I still want to improve more. There is always room for improvement. I want to head into the summer hungry and know that I still have more work to do. I want to work on my speed and becoming a complete player. Our whole team is really competitive and there is no slack.”

Thompson made a mistake during a late-March scrimmage that led to a touchdown for the opposition. Instead of brooding on the mistake, however, he made the necessary corrections and wound up leading all receivers in receptions during the scrimmage. 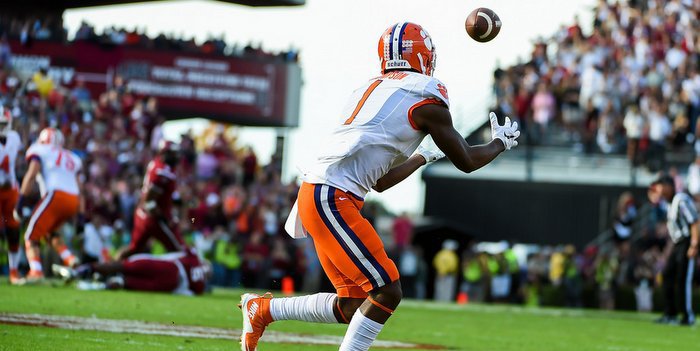 This catch against South Carolina was big for the Tigers "

“I'm just trying to get better every day. Looking at what I did last season, learning from my mistakes, reviewing film and getting better from it. I want to sharpen my skills. I'm going to keep going and keep pushing myself.”

The competition makes all the receivers better.

“It's really different because we have a lot of veteran guys out here and you're not having to think,” he said. “A lot of people come in thinking they are behind the eight ball. So, knowing the plays and knowing the system it's a great level of competition.”

Thompson will head home after school, but he knows the competition won’t stop. His mother, Tammy Thompson, is one of the most competitive people on the planet and she’ll push her son to his limit.