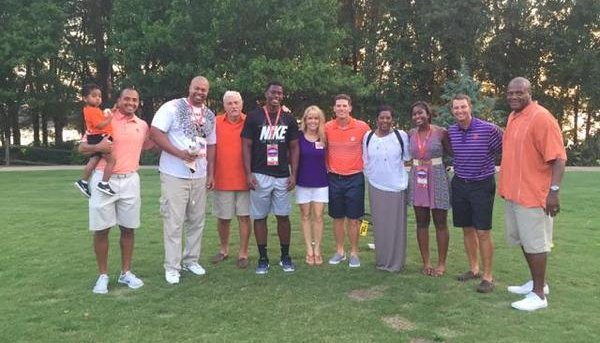 View Full Profile brought his family from Roswell Friday night to spend time with the other side of his family.

The 2016 standout 4-star linebacker out of Roswell (GA) made the trek to Clemson Friday afternoon with his family to attend the All In Cookout, the last recruiting event of the summer for the Tigers, and waited until midway through the Cookout to tell defensive coordinator Brent Venables

Brent Venables
Def. Coordinator / Linebackers
View Full Profile he wanted to be a Tiger. He is the tenth commitment for the 2016 recruiting cycle and the fourth from the state of Georgia. He is also the third linebacker in the group, along with Rahshaun Smith

Clemson was in the final three for Lamar’s services, along with Alabama and Auburn, and Lamar told TigerNet shortly after the announcement that Clemson was the best fit and that he had made up his mind before the trip.

“I just felt like Clemson was the most comfortable place. I felt like it was the right choice for me and my family,” Lamar said. “I had kind of already decided to commit. I talked to my family before we came up here, because I just had a good feeling.”

Lamar said he wanted to let the suspense build before telling Venables of his decision.

“I didn't tell anybody right away,” he said. “I waited a little bit and then during the cookout I told Coach Venables. I just told him that I talked to my family and that I was comfortable at Clemson and it was the right place. Everyone was excited.”

What was Venables’ reaction to the news?

Clemson’s feeling of a home away from home made the decision easy.

“All of the schools had great facilities and stuff like that, but I just felt like I was the most comfortable at Clemson,” Lamar said. “It's a home away from home and it's just the right place.”

Venables’ reputation as a coach that puts linebackers in the NFL helped as well.

“He definitely develops players well. They had the number one defense last year, so he's a really good coach,” Lamar said. “He sees me playing MIKE. I can't wait to play in the middle of Clemson's defense.”

Lamar, who had 34 offers, said he won’t be taking any more visits and is solid to the Tigers. As a junior, Lamar registered 131 tackles, four sacks, 13 tackles for loss and seven pass breakups. He's the No. 3 ranked inside linebacker in the country, according to ESPN and No. 107 in the ESPN 300.

Blessed and thankful to say I am officially committed to Clemson university pic.twitter.com/vtfvPYlGzr