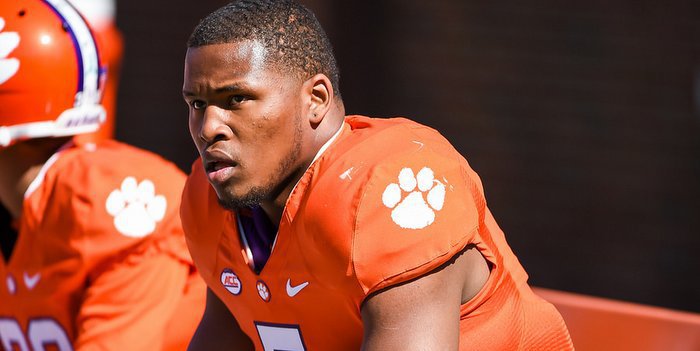 Tre Lamar makes a tackle during the spring game

Clemson defensive coordinator Brent Venables doubles as the team’s linebackers coach, so he has gotten an up-close view of true freshmen Tre Lamar and Shaq Smith.

The two linebackers both enrolled in January and went through spring practice with the program. Venables expects them to be key performers this season, and he has high hopes and high praise for them as players.

“I’m excited about them. I think that some of the answers to (how much they can contribute this season) might be a little different, might be compounded here in a few weeks after more experience,” Venables said. “I think that they’ll both make this huge jump during the course of fall camp, as well. What I love about them is their intelligence. They’re tough. They work. They let you coach them hard. They’re skilled. They’ve got the size, the physical size to go in and compete right now, the physical strength to compete right now.”

Lamar is a 6-foot-4, 240-pounder from Roswell, Georgia. He was an Under Armour All-American and finished with 156 tackles, 17 tackles for loss and 10 sacks during his senior season.

Smith is a 6-3, 240-pounder from Baltimore who attended IMG Academy in Florida. He also was an Under Armour All-American and had 89 tackles and four sacks as a senior. 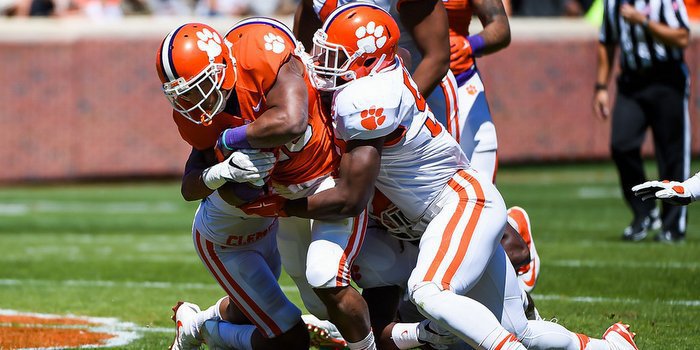 Tre Lamar makes a tackle during the spring game "

“Tre is closer to the ball. It’s easier to tell if he does or doesn’t. His instincts really jump out at you,” Venables said. “Guys with instincts, they just have a feel for the game, so certain things like finding the ball, priority No. 1, come a little easier for him. … But I’m excited about those guys. I can answer a lot of those questions and the things that I just said, that I can kind of check the boxes on those guys already. Sometimes you can say they have three of the five or whatever, or two of the five, but I really believe they’ve got five of the five, and just they’re very focused.

“Again, I’m talking about them because they’re at my position. They’re super focused guys about what they want, today and tomorrow, and they just don’t get distracted. Distractions don’t happen for those guys. Sometimes guys are so focused on greatness that they don’t let distractions in. More often than not, that’s not the case, and that’s something that guys can acquire through maturity. But the real special ones have it, or it’s developed sooner rather than later. They’re not perfect. They’ve got plenty to get better at, but it makes you feel, ‘OK, these guys have got a chance, sooner rather than later.’”