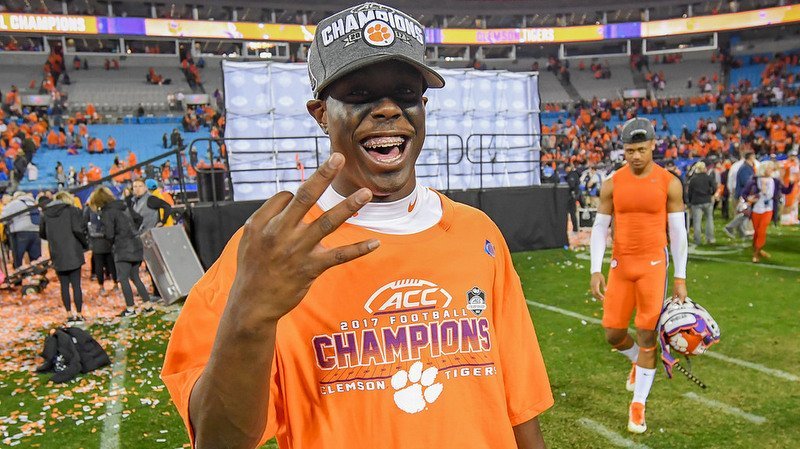 Etienne celebrates Clemson's win over Miami in the ACC Championship

SUNSET – If competition brings out the best in everybody, Clemson should get the best out of Tavien Feaster and Travis Etienne this fall.

Feaster and Etienne, Clemson’s top two running backs, each carried the ball 107 times last season, but Etienne exited the spring atop the depth chart. That spot isn’t guaranteed heading into fall camp, and running backs coach Tony Elliott says that is the competition he can’t wait to watch.

“I am excited to see the running backs. That is going to be a great competition,” Elliott said at head coach Dabo Swinney’s media golf outing. “Adam (Choice) is in his fifth year and he wants to play. Travis showed he wants to be the guy and did some good things last year, and Tavien he was the guy at mid-season and now he wants that spot back.”

Etienne loudly announced his presence to the nation with an 81-yard touchdown run in primetime at Louisville in early September, and finished the season with 706 yards and a 7.16 yards per carry average. He also scored 13 touchdowns, but a lack of consistency in pass protection kept him off the field at times.

He showed enough in the spring to be the number one guy.

“Obviously (Travis) is still a young guy, he has some things he has to improve in pass protection, but just like he came in fall camp (a year ago), he was the most explosive guy,” Elliott said. “Every time he touched the ball, he was very productive. So, we talked about it and we looked at production and his production was above the other two. That’s why he’s the guy at the top of the list right now (over Feaster and Adam Choice).”

“You saw that he was very, very explosive early,” Elliott said. “He didn’t quite know what he was doing so he was running fast and breaking tackles and as you learn, you have to learn to play within a system. It takes a little bit of patience. Also, you realize how long a season is. The biggest thing with him was conditioning. You got to get your body in a position to be able to withstand the punishment of a 14 or 15 game season.”

Elliott said Etienne went home to Louisiana disappointed in how he played.

“Knowing that he went home, and he was excited but didn’t play his best, right? So now that’s something I can use to motivate him and say, ‘if you want to show up in primetime, it’s about what you do in the offseason,’” Elliott said. “The biggest thing for him is just to push him and help him understand that last year’s touchdowns don’t carry over into this year’s. There’s going to be high expectations. You just gotta stay humble and focus on the little things. If you do that, then big things will come.”

Feaster added weight before the 2017 season, hoping that a playing weight of 225 pounds would help him withstand the rigors of a college season. Instead, the weight slowed him down.

“It was tough for him coming out of high school. He hurt his shoulder, so we had to put some weight on him so he could protect himself. (But) when he was a little bit too heavy, he lost a little bit of his explosiveness,” Elliott said. “Coming out of the spring, we said, ‘Let’s try and drop our body weight down to about 215.’ He has been carrying that here consistently the last couple of weeks, so the biggest thing is just being consistent every day. Now I think his body is in the best condition it’s been in since he’s been on campus. I am excited to see him on grass.

“Now we kind of got him bought in now to where his body needs to be. I’m excited to see him when we get on the grass. He’s been fully committed and doing everything that you ask.”

Add in Choice and freshman Lyn-J Dixon and the Tigers have options at running back.

“Competition brings out the best in everybody. Not just (Feaster) and Adam (Choice) but also guys at other positions. I think Travis came in and caught everybody’s attention with his ability. Now he’s starting to put a little more consistency with that ability, and it’s making everybody else a little bit better.”