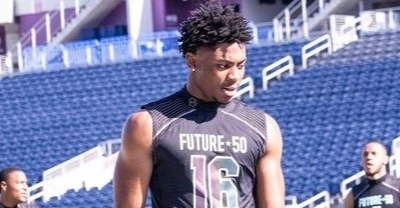 Davis was offered in May of 2019 by the Tigers.

The Clemson coaching staff is once again looking towards Pennsylvania for a prized prospect.

Four-star Derrick Davis (6-1 194) of Monroeville, PA is ranked the No. 2 safety in the country and No. 4 prospect in Pennsylvania in the 247Sports Composite. Clemson has been hot on his trail and Sunday he cut his list to a top seven that included the Tigers.

They are joined by LSU, Georgia, Penn State, Pitt, Southern Cal and Ohio State. Clemson offered in May of 2019.

“I got with Clemson the end of my sophomore year, Davis said. “Coach Mickey Conn called me and offered me then. He feels like I could be able to play any position in the secondary really, almost taking that same spot as Isaiah Simmons.”

Davis visited Clemson last June and that visit really helped the Tigers position themselves for a good run at Davis.

“They’re great people,” Davis said. “A great atmosphere. It was just a place I could see myself playing at really.”

Davis said he will graduate in December, and right now he’s eyeing somewhere around mid-season for making his college decision. He has committed to play in the Under Armour All-America Game.

First, I would like to thank all of the schools that have recruited me and have taken the time to reach out to me over the past 3 years. I am extremely blessed and humble to announce my top seven schools!!! pic.twitter.com/DmskaGtepC