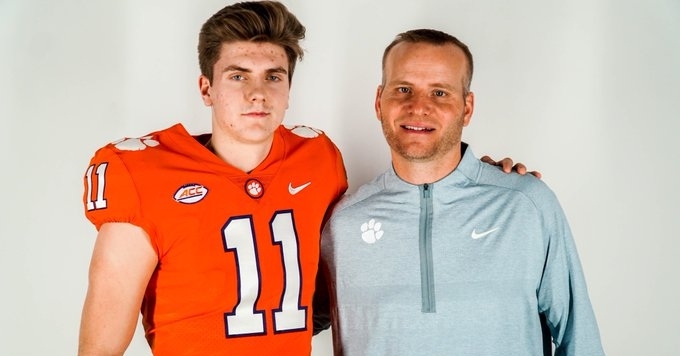 Veilleux poses with Brandon Streeter on his visit

Another top quarterback prospect was headed to Clemson for a visit, but the recent suspension of operations means that visit won't happen as scheduled. That doesn’t mean the Tigers have stopped recruiting, however.

Four-star quarterback Christian Veilleux of Potomac (MD) Bullis visited Duke last weekend and his next scheduled visit would have taken him back to Clemson for the second time in two months. The visit was scheduled for March 30, but the NCAA ruled a temporary dead period until at least April 15, as schools and athletic departments struggle to come to grips with the coronavirus.

Of course, Clemson has highly regarded 5-star quarterback DJ Uiagalelei, who is just a freshman, on the Clemson roster and with sophomore Taisun Phommachanh also drawing rave reviews, the position seems to be set for a while. So, attracting another high-level quarterback for the 2021 class could be a challenge. Veilleux, however, views the Clemson quarterback roster as a positive in his recruiting.

“I don’t see much as a negative,” he said. “There’s definitely pros and cons to it. But I think it’s a great thing. It demonstrates how well they’ve been doing things. Obviously, wherever you go you have to compete, and competition is always great, especially for me. I love competition. So, that part of Clemson is something that I like. I don’t shy away from it. Knowing that they get the best of the best every year shows that they are doing something right, so that’s a good thing.”

Clemson has not offered Veilleux as head coach Dabo Swinney and quarterbacks coach Brandon Streeter wait a bit to see how things play out with their lone ’21 quarterback offer in 5-star Caleb Williams of Washington, DC. Williams just visited Oklahoma and the Sooners are perceived as the favorite. But that doesn’t mean they haven’t recruited Veilleux with a lot of effort. He was in for a visit in January.

“It was a good visit,” Veilleux said. “I spent a lot of time with Coach (Brandon) Streeter and a lot of people surrounding the quarterback position. I went through the facilities and the campus and saw the academic support. It was a great visit. The facilities stood out. Those are amazing. Something else that stood out was the academics, just how good academically Clemson is. I didn’t know that beforehand. That’s really what I took away from that visit is that Clemson is really competitive in the classroom as well.”

Veilleux was looking at that return to Clemson late this month but that likely won't happen at this point as the school has shut down all activities. The communications with Streeter have continued.

“He’s keeping in contact,” Veilleux said. “He lets me know how highly he thinks of me. He really wants to get me back on campus to come watch practice and stuff like that. That’s pretty much what he’s been saying.”

Veilleux’s most recent visit to Duke shows the Blue Devils are making a strong push. As is Penn State, where he camped last summer and has visited multiple times. He’s also been to Tennessee, Kentucky and West Virginia. He said the schools he’s visited would count as the ones he’s most interested in.

Veilleux threw for 1700 yards and 17 touchdowns last season. He said he would like to make a decision before his season and is looking into the possibility of graduating early.