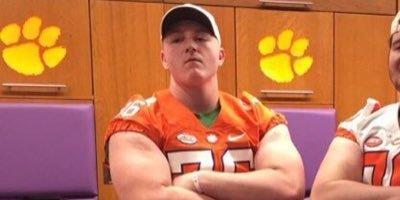 One of the top offensive linemen out of Georgia for the 2019 recruiting cycle is almost ready to concentrate on his junior season of high school football, but he has three trips he wants to take before high school ball starts – Clemson, Ohio St. and Michigan.

Harry Miller is a 6-4, 310-pounder out of Buford (GA), one of the nation’s top high school programs. Miller received a coveted Clemson offer Wednesday and is now making plans to make a return trip to the Clemson campus.

“I've been hoping to get an offer like this and I'm very excited. Coach Ford and Coach Davis from Buford talked me, and then I called Coach (Mickey) Conn and Coach (Robbie) Caldwell,” Miller told TigerNet. “I called them because I wanted to verify because I don't want to make mistake. I called them to make sure we were on the same page and I wasn't doing anything wrong. It’s very exciting and I’m very happy.”

“Every time I go to Clemson, the coaches are always just super nice,” he said. “They always care for everybody that's there, even if it's not a prospect. Even if it's just a regular person, there's always a genuine care for people and that's nice.”

Miller, like most offensive linemen, is ready to stop talking about football and start hitting people.

“I'm really excited for this year because it's been a whole year that I've been able to not just work out more and run more and get better physically, but last year as a sophomore - when you're playing at Buford as a sophomore against great competition it's really intimidating,” he said. “Now I have a mentality to where I'm not so nervous anymore about playing. Friday nights are going to be a night where I can just show out and do the best that I can because I know that I've prepared well. I'm excited just to play physical and to play mean if you want to call it that. I'm very excited to play with my guys on the line and the rest of the team and hopefully, we can get a ring.”

Miller has visited Clemson several times including Junior Day and the spring game, and hopes to make another Clemson stop a part of his summer tour.

“I'm leaving and going out of the country this Friday and I'll be back in two weeks and then we have a mandatory offensive line camp,” Miller said. “I'll visit Clemson, Ohio State and Michigan and then we have acclimation week - which is mandatory - the last week of July. Then school starts back up, which is crazy, and then we're essentially back to football season. And I’ll definitely be back at Clemson for a game.”

“I'm not sure right now because when I make a commitment, I want 100-percent and steadfast in it,” he said. “I don't want to de-commit. I want to be a man oof my word. I want to be absolutely positive, without a doubt that where I commit is where I want to be for four years after high school.”

Blessed to receive an offer from Clemson! @ClemsonFB @BufordProspects pic.twitter.com/PfWyIRoWCn