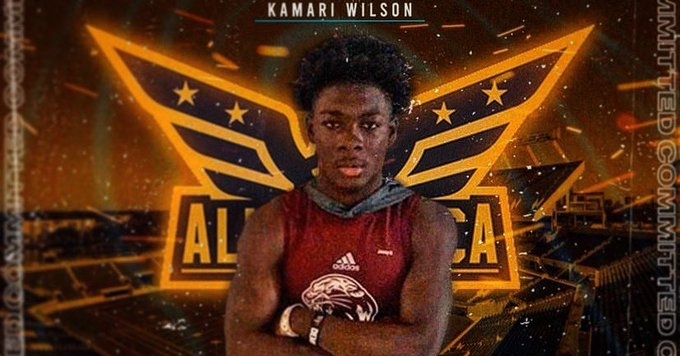 Wilson is already feeling the love from Clemson's commits.

With recruiting starting to heat up for the 2022 class, Clemson began the process of extending offers to those prospects this week. One of those coveted Clemson offers went out to a safety in Florida, regarded by many as one of the top players in the country.

Kamari Wilson learned of a Clemson offer from his high school coach recently. The 6-1, 195-pound safety from Westwood (FL) Fort Pierce has received offers from Alabama, LSU, Florida, Miami, and many other top schools around the country.

“I’ve talked with Coach (Mike) Reed a few times,” Wilson told TigerNet. “We just talked some football and how our families have been in this coronavirus pandemic. He’s a great guy, very down to earth and easy to talk to. He likes how I’m always around the ball, my playmaking ability, and the effort I give on the field.”

Wilson is one of the first prospects in the 2022 class to receive a Clemson offer. What did the Clemson offer mean to Wilson?

“My head coach called me after I finished working out at the beach with my cousin to let me know they had offered me,” he said. “It was unbelievable. Clemson doesn’t offer you unless they really see something in you, so it was amazing to hear that they believed in me and the hard work I have been putting in.”

Wilson has taken notice of Clemson and the program that Dabo Swinney has built, and still eager to learn more about what Clemson has to offer. Although Wilson hasn’t visited Clemson yet, he plans on checking out the campus very soon.

“I know they have built a great program,” Wilson said. “They are huge on the family aspect of things. I want to get a feel for the coaches, culture, and get on campus and see if it’s somewhere I can call home. Once everything is safe, I will be taking a few visits, and Clemson is definitely one of them.”

After receiving a Clemson offer, many of Clemson's current commits from the ’21 class reached out to Wilson via Twitter to let him know they would love for him to join the family. Will Shipley, Ryan Linthicum, and Marcus Tate all took the time to congratulate Wilson, and Wilson felt the love from the Tiger commits.

“It’s just a great feeling -- because coming from a small town you don’t think guys like that really notice you,” Wilson said. “It’s a good feeling to see that they actually know who I am and want me to be a part of what they are building.”

What factors will Wilson be looking for in a school as his recruitment continues?

“How they develop their defensive backs, playing time, and just the relationship between the players with the coaches and players with each other.”

Going into his junior season, Wilson is focused on becoming the best player he can be. What is it about Wilson’s game that makes him one of the top players in the country?

“The effort I give on the field,” he said. “I’m a dedicated and hardworking team guy. I’m giving my team my all every play. I don’t take plays off and I think that’s what usually puts me in position to make plays. There is always room for improvement. I work on becoming a better overall player every day. The minute I slack off I could lose out on my opportunity.”

As a student of the game, Wilson has studied many safeties and takes something from all of the greats to add to his game.

“I go through all of the current and former safeties films from their college career and pro careers,” he said. “I try to take something from each of them because every great safety was unique in their own way. I just focus on finding my swag and perfecting it.”

Wilson has a recent bench press max of 295 pounds, while also recording a max of 405 on squat and 265 on power clean at the end of his sophomore football season. Wilson’s ball skills and football IQ are constantly on display any time the ball goes up in the air, while also delivering big hits to any receiver or running back who crosses his path.

During the 2019 season, Wilson was named first-team all-area, recording 114 tackles, 5 interceptions, and 5 touchdowns. Currently listed as a 4-star by 247 Sports, Wilson is ranked the No. 1 safety in the country and the 34th player overall.