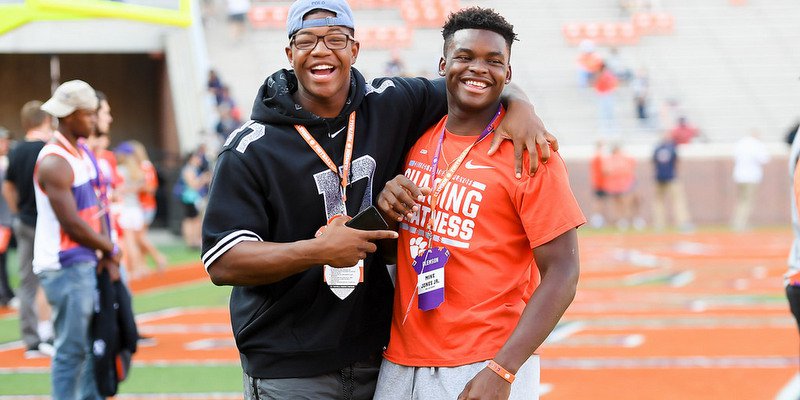 One of the top defensive ends for the 2019 recruiting cycle spent last weekend watching Clemson defeat Auburn in Death Valley, a performance that he calls "amazing."

Bradenton (FL) IMG defensive end Nolan Smith – the No. 4 ranked player in the ESPN Jr. 300 – traveled to Clemson Saturday with his family after being forced to evacuate from IMG due to Hurricane Irma and he told TigerNet he couldn’t have asked for a better game experience.

“It was nice. It was a really big game and I was happy that my family and I were able to go to an amazing game like that,” Smith told TigerNet earlier this week. “That (defensive performance) was really amazing. It was really good. Even my mom enjoyed it.”

While Smith has been to Clemson several times, he said Tiger fans really took him by surprise.

“Really, the fans. I always thought that being a Georgia fan growing up and loving Georgia that I was a humongous fan and if anyone said anything bad about Georgia, I would kill and die about anybody, even when Todd Gurley was there and when Lorenzo Carter came there,” Smith said. “I thought their (Clemson) fans really believed in them, trusted them and loved them. A couple of fans knew my name even though I'm a Georgia commit and that was kind of a shocking.”

Smith took in the Auburn game with teammates Brendan Radley-Hiles and Clemson commits Xavier Thomas and Mike Jones Jr. Smith said that Thomas is still on him all day, every day, about flipping to Clemson.

"Do you read Twitter? X is out loud with it, but Mike is low key with it," Smith said with a laugh. "Even when I told X I was going to wait to say I was going to the game, he had to publicize it to the whole world and tell everybody I was going. Sometimes, but you don't get that luxury (keeping things a secret) with Xavier Thomas."

Despite Thomas’ persistence, Smith said he wouldn’t want to traverse the recruiting process with anyone else.

“It's really fun because those are guys that I come and find and really look up to,” he said. “The type of game we play and where we play, we're a brotherhood and we get to enjoy everything together, so it just makes it more enjoyable rather than just meeting random people on a recruiting visit.”

What’s next for Smith?

“I'm still open and looking at schools, but I'm committed to Georgia,” he said. “After the hurricane hit, I'm just sitting back. I really don't know. I know I've got Alabama and Auburn and there are some other options.”