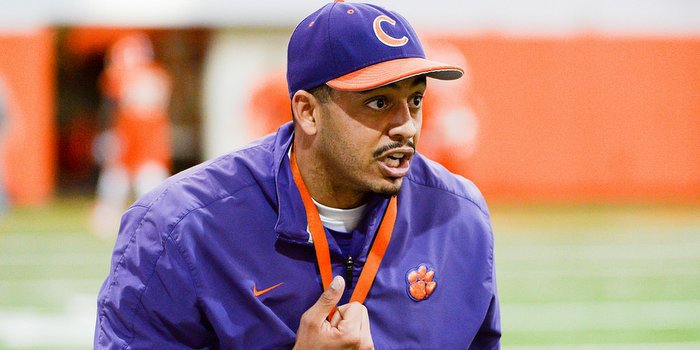 Elliott says he won't speak with his sister this week

CLEMSON – The rivalry between Clemson and South Carolina is one of the fiercest in the nation, and it’s known for the acrimony between the two fan bases.

Sometimes, it gets so bad you won’t even talk to your family during rivalry week if they pull for the other school.

Even if that family happens to be a sister you love dearly.

Co-offensive coordinator Tony Elliott grew up in the state and played football at Clemson, so he knows the rivalry bleeds over into friendships and family.

"I had two high school teammates that went to South Carolina, I was the Clemson guy and there was a lot of trash talk, but a mutual respect,” Elliott said this week in the WestZone. “You hated them on the week of the game, but at the end of the day we were just guys competing against each other and I think I learned the most about the rivalry when I stepped away from the game and worked at Michelin and seeing how much it meant to the people of this state and how hard they pulled. It gave me a greater appreciation as a player, growing up in the state of South Carolina you understand it, but I don't think you really understand it until you're done playing."

"Oh, no question. My sister went to the University of South Carolina and my aunt graduated from there,” Elliott said. “There was a rough little spell there, but it's always good to have those bragging rights. I think I always took the high road when we had the upper hand, but when we were on the losing end, trust me, they let me know it."

When asked who his sister and aunt would be pulling for Saturday, he laughed and said, "I don't know, I'm not talking to my sister this week."

The Tigers and Gamecocks renew acquaintances this Saturday at 7:30 p.m. in Death Valley, and Elliott and Jeff Scott will match wits with the Gamecocks new head coach, Will Muschamp.

"They're getting better with every game. Those guys are settling in on what they're doing schematically” Elliott said of the Gamecocks. “They've got some depth up front, it's structured differently than last year. They're more aggressive at times and put guys in a position to be successful. They're playing hard on defense and have energy and versatility. I think #3 is playing a lot of spots for them, he's playing at a high level. You see #8 flash as a defensive end. You see them move the linebackers around, they're starting to get more comfortable. They've done a good job of limiting people in the red-zone."

Clemson, which has been prone to turnovers this season, faces a South Carolina team that has forced 24 this season.

"They do a good job of being able to rush the passer with three, and drop eight guys into coverage,” Elliott said. “They can mix their coverages up to confuse the quarterback, and they also do a good job of tipping balls. #7 has three picks I've already seen on tape where he's had a deflected ball. The biggest thing is changing the structure and dropping guys in to coverage and whenever they have the opportunity they're going to tip the passes."

The Tigers have been particularly susceptible to turnovers in the red zone, and Elliott said the game would be won or lost on how the Tigers perform there this week.

"Definitely, I think if you look at them, they're very good against the pass,” he said. “Their numbers might not be what you think in the run game, but they still present problems up front. Our issues have been turnovers in the red zone. In these last few weeks, we've converted those into touchdowns. I think it'll come down to third downs and being able to score points when we get down into the red zone."