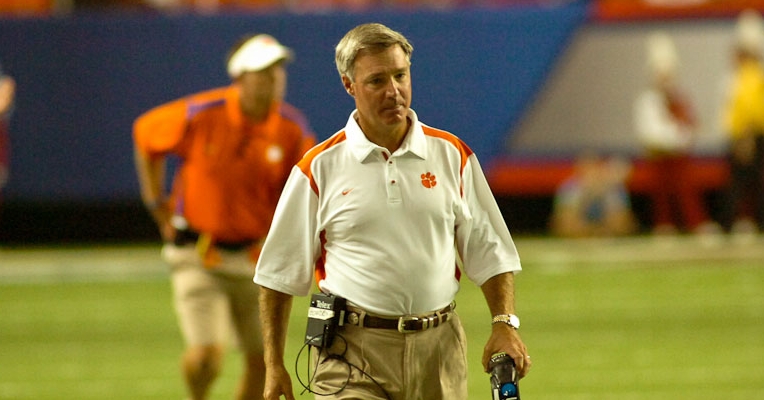 Bowden thinks college football will be played this season.

Former Clemson head coach Tommy Bowden is like the rest of us, looking for things to keep busy as he waits for life to return to some sense of normalcy. As a result, he reads and reads a lot, and he thinks the college football season will be played.

Bowden was the head coach of the Tigers from 1999 until midway through the 2008 season. He has not made a return to coaching, instead spending his time as a television college football analyst. As the pandemic has gripped the nation, Bowden spends his time checking on his parents – former FSU head coach Bobby Bowden – and his children. He also takes his boat out on the bay, and when he isn’t puttering around the house, he reads.

“Now that I'm not doing TV anymore, I read. And I do some TV and radio,” Bowden told TigerNet this week. “I still do some radio shows. I did a radio show, out of Tampa a couple of days ago. And, of course, the first thing they asked me about was Dabo, but I'll read and keep up with it that way since I'm not as detailed since I'm not doing the TV or anything.”

Bowden thinks the college football season will be played, but also expects the level of play to suffer.

“I think a lot of it is going to be in the hands of the states,” Bowden said. “Gosh, what, six weeks ago, Kirk Herbstreit said we're not playing. It doesn't look like it is what they were saying. So we’ve come a long way in a short period of time, and it is really impressive because now we're definitely going to play. It's just, who's going to be allowed to come? All of a sudden, listening to Ed Orgeron at LSU, he said, we're going to have a packed house down there in Baton Rouge. But I know the state health officials are going to have a lot of say, and university presidents and boards and all that will have a say. So I think we'll play. I think the quality of the game might be a little questionable.

“I'll say things might be a little fragmented early in the season because schools like South Florida with Jeff Scott, and Florida State with Mike Norvell, they didn't have spring ball and they are new coaches, so they're farther behind. I think everybody's going to be a little bit behind fundamentally. Maybe conditionally, because of there are no spring ball, really no active summer conditioning. But I think they'll play, and everybody's waiting out to see what kind of restrictions are going to put on fans.”

Clemson started spring practice in late February and was able to have nine practices before the virus halted sports, and Bowden says the Tigers will have an advantage over other schools.

“Well, that's going to be great for him (Dabo Swinney). “Great advantage because every year, leadership changes,” Bowden said. “And I think with anything, when you get to a stage like Alabama is, and like Clemson is, you've got really good players, you're going to reload every year, you're going to have a chance because the amount of talent. But how has your leadership been developed? Those nine days of leadership are going to be really, really beneficial for these like Dabo and Alabama and how much they got in. But just the fact that they got nine days in, and there was just a little turnover, and you have a lot of players that have been in the system for a while. I think they'll be really instrumental as far as leadership and finding out who his leaders are.”

The NCAA has proposed a six-week ramp-up period to get players back in shape, and Bowden thinks head coaches will use that extra time to teach fundamentals.

“The players are going to be in shape. We are at a stage now where everyone understands working out and staying in shape and nutrition and things like that,” he said. “As coaches, we don’t have to force that. That's going to be a natural process that will happen in six weeks. I think the biggest thing is going to be is how are you going to teach your fundamentals and then have the installation of what you're going to use in that first week of the season. I think that's going to be more important because there's going to be guys, they're going to play like freshmen, that didn’t have that spring ball, it's going to take more mental capacity for them than physical. So I don't think the biggest question mark is going to be, can we get in shape? Six weeks is plenty of time to get in shape. I think it's more the mental preparation and how they're going to attack retaining offenses and defenses and things like that.”