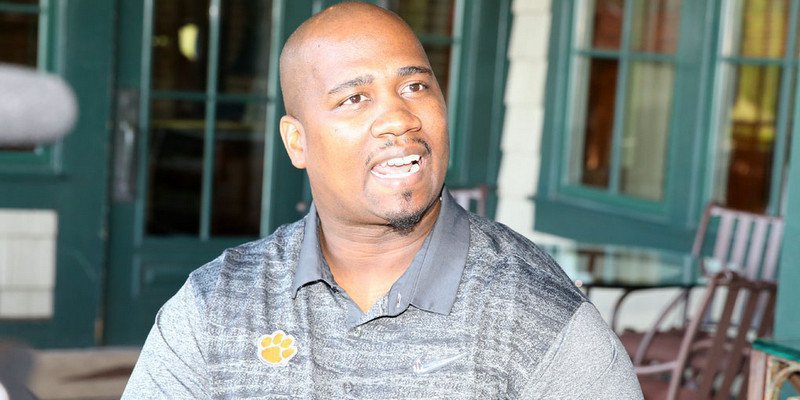 SUNSET – Adding a new coach to a staff that has been together for multiple years, and won a National Championship, can be tricky for a head coach. You have to find the right person, one that can not only coach but fits in well with your players and staff.

Dabo Swinney appears to have a hit the proverbial home run with the hire of defensive line coach Todd Bates, who joined Swinney’s staff after the departures of Marion Hobby and Dan Brooks last January.

If you had any doubt that Bates fits in well with the Clemson culture, all you have to do is talk to him for more than three minutes or read some of his poetry or see him grabbing the microphone at the Ladies’ Clinic last Saturday and watch him lead the throng in “We Are the Champions” at the top of his lungs.

Making the leap from Jacksonville St. to Clemson was a no-brainer for Bates.

“Oh man, why wouldn't you want to come to Clemson? It's a great program,” Bates said last week. “Coach Swinney and the environment that he has created here at Clemson, its second to none. It's all about the people, and you feel that not just as a recruit but also as a coach coming to work Coach Swinney's camp or just coming to visit, you can feel welcome. Everybody understands when they're really welcome somewhere and when the people really like each other and love each other.

“And that's what I felt every time I came to Clemson. So immediately after coming and experiencing that I was like man I know because I believe success comes down to the circle and the soil that you're in. You have to know where you can thrive and I knew from the time that I visited Clemson and came to work camps that this would be an atmosphere where I could thrive and grow to the maximum.”

Bates is different when it comes to recruiting – he not only builds relationships in typical fashion, he also writes motivational poetry and sends it out to prospects and players alike.

“I do a lot of motivational poetry, whenever I'm away from the preparation of breaking down opponents. I use it for recruiting, and when I'm away and just coming off vacation, that part of me never shuts off, I've always used it to motivate,” Bates said. “I've not always let people know that I have done it, but I started letting people know that I was a poet my sophomore year in college and I use it all the time.

“You may see one of your players going through something, and it's just a different way to come at them. They have everybody coming at them the same way and it's a way that I have been able to make an impact with my guys and relate to them cause a lot of times you remember things if they rhyme, so a lot of my coaching and a lot of the way that I teach I find things that rhyme so it can stick in their mind, I just did it without trying.”

Bates walked into a good situation at Clemson – the Tigers have two of the nation’s best defensive tackles in Dexter Lawrence and Christian Wilkins and outstanding defensive ends in Clelin Ferrell and Austin Bryant. There is also depth behind that front group.

“That's a blessing, it all happened in God's timing and just walking into the depth chart of me already having a d-line and those guys coming in and playing for two national championships in a row and having that big game experience, it doesn't get any better than that. “I couldn't have walked into a better situation. Those guys have also made the transition easier because when I first got here, of course, they knew the play books better than I did, and I humbled myself and asked them sometimes because I would get some concepts mixed up. Christian has been a phenomenal leader. All those guys - Dexter, Austin, Ferrell, they just helped make my transition that much easier because of how mature they are as a unit and what they have already accomplished. They are not afraid of heights. They climb the mountains, and it’s not their first rodeo, and they really have made the transition smooth for me.”

Wilkins made a lasting first impression.

“That was the first time I met him, it was our first meeting sitting down one on one,” Bates said. “He asked me some questions about football, but then he also asked me like five questions about my family. I just had them all over to the house to eat on Friday and cooked tacos for them, that's my specialty. We didn't have much left over because we had all the d-ends and d-tackles over, so that was a great experience. We just grow every day and get to know and build those relationships; you can't force them.”