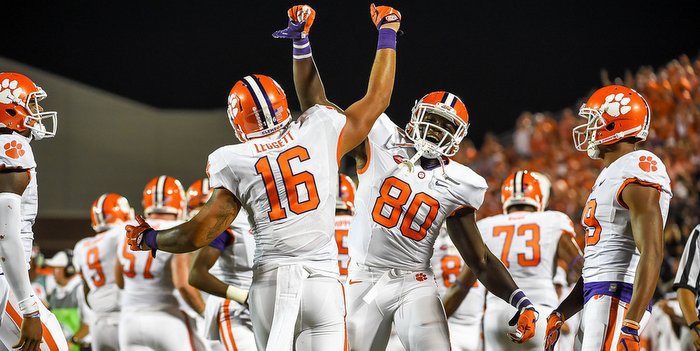 Can Milan Richard emerge as a receiving threat?

When Deshaun Watson takes his first snaps of the spring next week, one of his favorite targets in tight end Jordan Leggett will be split out beside him. The biggest question mark when it comes to tight ends centers on who will get the most snaps behind Leggett.

Leggett toyed with the idea of foregoing his final season of eligibility and declaring for this spring’s NFL Draft, but in the moments after Clemson’s loss to Alabama in the College Football Playoff National Championship Leggett said he was returning to Clemson.

The importance of Leggett’s return can’t be overstated – he played almost 800 snaps last season and was one of three finalists for the John Mackey Award, presented to the nation’s best tight end. He had 40 catches for 525 yards and eight touchdowns last season, and he caught 15 of his passes on third down. Twenty four of his catches came when the Tigers were either tied or losing, showing his value as a weapon that Watson counted on in crucial situations.

Leggett’s blocking also improved last season, and he will once again be counted on to solidify the tight end group. This spring, however, isn’t about Jordan Leggett. His spot is safe for now. This spring is about finding out who the next man up will be. Gone are Stanton Seckinger and Jay Jay McCullough, and the next tight end up is rising sophomore Garrett Williams.

However, Williams played just 96 snaps last season (mostly in blocking situations) and didn’t catch a pass. Against Alabama in the title game, Williams only saw action on special teams as Seckinger reeled in the eight snaps not played by Leggett.

Williams drew rave reviews in fall camp last season and proved to be valuable as a blocker in short-yardage situations and he logged four tackles on special teams. This spring will be critical for Williams’ development as a threat in the passing game.

Richard redshirted in 2014, and many wondered if he would step forward to claim playing time last season. Richard looks the part, but the playing time never developed and he logged just 28 snaps with – you guessed it – zero receptions last season. He also saw action only on special teams in the title game. The nephew of Herschel Walker will have to prove he’s ready for more responsibility and it starts this spring.

That brings us to Cannon Smith, who also red-shirted in 2014 and logged 29 snaps last season with zero receptions while seeing most of his action on special teams. He was rated as the No. 3 tight end in the nation by ESPN.com coming out of high school and like Richard has the bloodlines – his father Bill played for Clemson’s National Championship team in 1981 and is currently a member of the Clemson Board of Trustees.

The final piece of the puzzle for spring is D.J. Greenlee. Greenlee’s stats are eerily similar to those of Richard and Smith – he logged 27 snaps last season, didn’t catch a pass and saw action only on special teams against Alabama. He has just 55 snaps over his first two seasons and hasn’t recorded a catch.

Freshman J.C. Chalk arrives over the summer, but with four scholarship tight ends ahead of him I’m sure the coaches would love to see Chalk redshirt. Chalk can be a receiving threat, however, and someone ahead of him on the depth chart will have to prove they can do more than block. This spring will critical in finding out who those one or two players happen to be.